How to Throw a Party with Lingerie Models

Howcast is an online destination, friended by YouTube that “empowers people with engaging, useful how-to information wherever, whenever they need to know how.” That includes concise, practical, and often times comical video tutorials on the educational, the useful, and the risque. 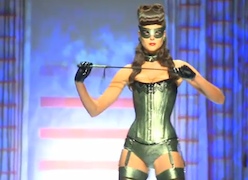 Through its vast distribution network, Howcast reportedly streams tens of millions of videos a month to those in need of knowing how to do whatever is they need to do (I account for at least four of those monthly streams due to an inability to remember how to dress myself for formal occasions). And through its tens of millions of monthly streams, Howcast has been able to entice big name sponsors to pay for Howcast-produced branded content. It’s a model that’s putting the company on a path towards profitability (if it’s not already there).

So, with it’s business operating effectively, the principals at Howcast asked themselves, “What more can we do with the how-to genre of videos?” Their answer is Party Builders.

The six-part web series is a diversion from Howcast’s normal, didactic fare and ventures into the realm of high production-value documentary, going behind-the-scenes at a handful of select, extravagant parties and showing viewers how the events come to be.

“We strive to constantly elevate the how-to genre of videos and we’re excited to uncover niche interests such as ‘party building’ and provide high-quality web content celebrating such interests,” wrote Co-founder and Vice President of Production at Howcast, Darlene Liebman over e-mail. “Party Builders is the next level of how-to web series and provides audiences with the creative and complex processes that go into some of the world’s most exciting parties in a high-quality and engaging package.”

Liebman’s no liar. If Party Builders is anything, it’s pretty to look at and grabs your attention. The first two episodes cover the Lingerie New York event, including a demonstration of how the svelte models use a water-soluble lube to fit into latex unmentionables, a look at aerialists in training, an explanation of how the haute couture fashion show benefits microloans for underprivileged women, and everything (well, almost everything) in between.

The eye candy certainly helps, but pretty good, right? If you think so, too, stay tuned for more installments of Party Builders straight from the Doha Tribeca Film Festival and Playboy’s “sizzling” Art Basel Party. An intriguing line-up, to say the least, which provides a great answer to the question I’m sure the team at Howcast asked itself,  “How can we get people to watch this show?”