‘The Onion’ Is Killing Its Counterparts In TV Ratings

Looks like viewers prefer fake news over real news. According to Sportsnewser, the mid-January premiere of Onion SportsDome on Comedy Central beat out ESPN SportsCenter, the show it was mocking. And Onion News Network, which debuted on IFC at the end of January, has proven to be a big critical success. 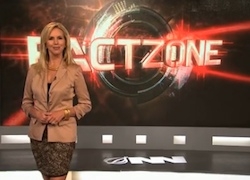 Former Fox News anchor Suzanne Sena, who has appeared in some of The Onion‘s highly successful online video projects, has received great acclaim as the series’ lead anchor Brooke Alvarez. NPR’s Linda Holmes writes, “Sena’s effortlessly brutal version of the modern television journalist is more than just a dumb, bland newsreader there to recite jokes, which would have been a very easy way to go.” Metacritic gave Onion News Network a score of  77 out of 100, with a score of 80 from both The New York Times‘ Neil Genzlinger and Variety‘s Brian Lowry.

Above: Alvarez and NBC’s Natalie Morales have a good old-fashioned “news-off” to see who could deliver the fastest and most articulate news copy. Hat tip to Molly Stark Dean at TVNewser for sharing this clip.