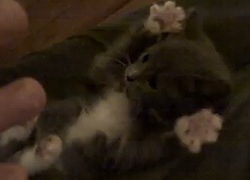 Let’s face it, vloggers are nothing special (ok, not entirely true, I have some good friends who are YouTube vloggers, this is just central to the point of this article) You can walk down the street or get on a bus and hear one or more hobos expounding their opinions on everything from politics, religion, to the impending return of their alien lord Zardox, so why watch the sam thing on YouTube?

But what is the true essence of YouTube? What videos get upwards of 3,000,000 views per video and acquire more than 95,000 subscribers? What videos make entertainment news for their popularity and inspire dozens of memes and parody videos? What are the videos that get passed around between friends, relatives, and coworkers?

Videos of kittens. That is what YouTube is for, in my humble opinion. My roommate is all too familiar with the expression I get and the shrieking noises I make when I find a new kitten video online. Take for instance the current coolest cat on the internet, Maru, a Scottish Fold from Japan. Since July 2008, this cat’s owner has been uploading videos of Maru doing everything from chilling out in a sink to performing magic tricks (Disclaimer: cat does not do actual magic).

Maru has a blog of pictures and new video uploads, a Twitter (Yes, even cats have Twitter now), and even a book titled I Am Maru. This cat has achieved more in his life (in cat years or human years) than most people. 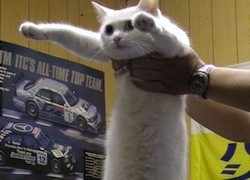 Videos and pictures of adorable animals on the internet is nothing new. Sites like ICanHasCheezburger depend solely on pictures of cats accompanied by relevant misspelled captions (because cats can’t spell, get it?). A large majority of Internet Memes stem from these pictures of humorously posed felines. From Longcat (right) to the ever popular Ceiling Cat, I think it’s more than safe to say… The internet is for cats.

I leave you with this proof.