‘The Office’ Kisses Up To Corporate With ‘The Podcast’

Just in time for the new episodes of The Office which begin airing this week, NBC released another companion web series The Podcast. 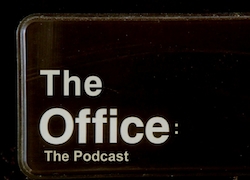 The series follows the character Gabe Lewis’ (Zach Woods) attempts to get his new podcast for the Sabre website off the ground. Inspired by jealousy of character Oscar Martinez’s (Oscar Nuñez)’s There’s No Accounting for Style blog, Gabe attempts to impress corporate with his initiative. Of course things go awry as he records conversations that should remain off the record.

The first three episodes have been released, chronicling the creation, recording of the first entry, and the grand debut of Gabe’s podcast. Also released was a behind the scenes clip with some of The Office cast members talking about their own interests in podcasts.

With companion blogs and web series such as Subtle Sexuality, The 3rd Floor, and Kevin’s Loan, The Office has successfully created a micro universe to satisfy viewer’s appetite between seasons and when on hiatus.