The Hilarious Personalities of Meryl Hathaway in ‘Disconnected’ 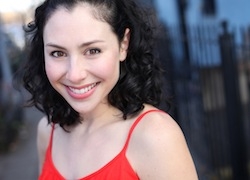 Do a search on YouTube and you will find dozens of one man or woman shows, most of which are an unsettling mix between poorly executed comedy and possible multiple personality disorder. This is not the case with Meryl Hathaway’s Disconnected web series, produced by Hathaway’s own Curly Cue Productions.

The series follows Sandy, an endearing Midwestern housewife who loves church and Girl Scout cookies dipped in flavored vodka, making and receiving calls to a wide variety of characters, all played by Hathaway. She portrays everyone from a little girl trying to reach her quota of Girl Scout cookie sales to a phone sex worker who gets more than she bargained for by dialing Sandy’s number.

Meryl Hathaway who plays, well, the entire cast, is an actress and writer from Brooklyn, NY, now living in Los Angeles. She can be seen in several national commercials as well as various short and independent films, and videos for College Humor and Landline TV. Meryl studied improv at UCB under the tutelage of Betsy Stover, Kevin Hines, Joe Wengert, Porter Mason and Will Hines. She is the creator and producer of Disconnected.

“My characters come from observing basic human behavior- mannerisms, facial expressions and perspectives of people who could be standing next to you waiting for coffee, be your best friend, or someone you love to hate… regardless, they are each someone we all know,” says Hathaway. “Sandy is a unique combination of the love for that unpretentious midwestern sweetheart, the naivety that I think most of us cynical people of the world have lost, while still being a strong and opinionated woman. She is that person you just have to like… that neighbor who drives you a little nutty on occasion but would throw herself in front of a bus to deliver you a spoonful of sugar.”

With a variety of wigs and accessories and a knack for accents and character voices, many of the characters are barely recognizable as Hathaway. The series is thus far very unique and funny with good joke continuity in each episode. According to the creator, “As a cynic always learning how to be a better person, creating these characters inspires me to accept people of all types and find what’s human and hilarious about everyone.”

Disconnected runs at less than three minutes an episode, is released bi-weekly on Wednesdays and can be found on YouTube, Vimeo, and on the series site. Eight episodes are already released.