The first and third Die Hard movies are legendary action films. Not just because of Bruce Willis’ John McClane, and not just because they’re brutal flicks where gunfights and hand-to-hand combat always ends in our hero walking away with more of his blood spilled than his opponent’s. It’s because these two films have an amazing sense of storytelling. 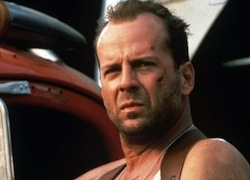 They’re not deep movies, and they don’t want to be. What they will do is allow you, the audience, to ride shotgun with the action. You’re in the car wreck, not standing on the sidewalk with a FlipCam.

There’s one scene in particular that really drives this home, and it’s a clinic on economically showing the inner thoughts of our lead, and creating suspense. Today, I’ll break it down.

Very early in Die Hard with a Vengeance, McClane’s friend Detective Ricky Walsh notes he always plays his badge number for lottery numbers – 6991. This isn’t an important part of the conversation. You might even think it was an improvised piece of dialogue for the sake of building that camraderie before the plot kicks into full gear.

Prior to the scene I’m about to show you, we see Ricky killed in the Federal Reserve, and Otto, who doesn’t speak English, taking his badge off his body, wanting to play detective. Now, McClane has a feeling something’s wrong when a bomb is placed in a school in an attempt to force police to have to go to every school in the city and clear them. “What is it that Wall Street doesn’t have? Schools. And what is it they’ve got a shitload of?”

Unfortunately the only clip I could find was recorded on a camera, but we’ll just move past that. This scene is in no way SFW – plenty of language and violence.

The economy of this scene is staggering. As McClane walks in, he has no idea who these people are. He thinks they simply work for the Federal Reserve. But, in fact, they’re Simon Gruber’s people, and because they’re Gruber’s, they know exactly who McClane is and are taking him down to the basement where they can finally finish him off.

In the elevator, McClane’s happy for a moment of quiet. He doesn’t suspect a thing – until he sees the badge. We know that Otto took the badge off of Ricky, and when the camera focuses on the number, there’s an epiphany as we remember it calling back to the very beginning of the film.

Then McClane starts joking. And when he jokes, typically bullets are about to fly. An entire side-story arc comes to a conclusion – and it only required one piece of dialogue to be set in motion. It’s almost terrifying in its simplicity, and yet we’re held to the edge of our seats as McClane walks into the building where everyone who isn’t him is out to kill him, but he doesn’t know it.

He walks into an elevator, outnumbered three-to-one point blank. But through simple memory – no superhero deduction, no “lucky break” – he knows his friend is dead, he knows they killed him, and now he knows these guys are part of Simon’s crew and he’s stuck in a mothereffing elevator with them.

Knowledge is, indeed, power. But that power should not be taken away from the audience without good reason – when we’re in the know more than the characters, suspense is crafted. Suspense is rarely “what’s going on?” but “how is this going to shake out?” Even though we know McClane isn’t going to die, because he’s a damn cockroach, we’re still on the edge of our seats.

That’s the mark of a perfectly constructed scene.