[Editor’s Note: We just can’t get enough of predictions this year, so we broke out the task of sizing up what’s in store for 2011 in web video to two writers, not just one. Here is Mathieas’ take, enjoy. ]

Ever since early man discovered the concept of time, which he discovered before fire but after sex, he has been obsessed with predicting what the future holds. While anyone with a basic understanding of time travel knows that the future is unwritten, one can still make an educated guess by examining past behavior. Today, we want to examine five web TV predictions for 2011. 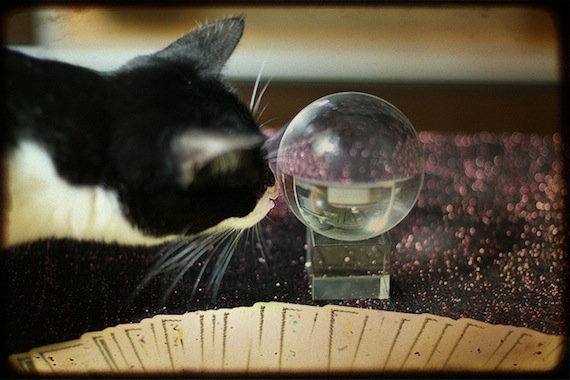 1. The Web Will Overtake Traditional TV

Streaming services such as Hulu Plus and Netflix have made major inroads into the cable dominated TV world in a trend that is likely to accelerate in 2011. As more and more people ditch their expensive cable TV providers, over the web alternatives will continue to gain momentum. In 2011, audiences will view more television programming over the Internet than broadcast and cable combined.

Furthermore, illegal downloading does and will continue to shift the balance toward web and away from traditional content delivery. In Europe, popular American programs air a season or two behind the U.S. Europeans, who no longer wish to wait, have turned to the web where programs are available within hours of the domestic release. Similarly, U.S. audiences have discovered foreign-produced programming that is equal if not superior to some American shows. In fact, my favorite new show of the year is a Canadian series (Lost Girl) currently unavailable in the U.S.

As more and more consumers begin to watch more and more programming over the web, one trend that will not change is their venue of choice, the television. While the ability to watch programming on one’s laptop, iPad, or smartphone is convenient, when one wants to truly enjoy a night’s entertainment, nothing beats sitting on the couch in front of a 42 inch LCD. Mom, Dad, and the kids are simply not going to gather around the laptop to watch an episode of Quantum Leap on Hulu Plus.

Fortunately, there are numerous options and devices available for streaming web content to a television set, even though, so far, no one device has gained dominance. The early money was on the big name providers, Apple and Google; however, GoogleTV has faltered with tepid reviews and less than stellar performance. In my opinion, the smart money is on Boxee. Boxee has the longest development history and unlike many of the other systems, it is not married to a particular device, which makes it attractive for integration into other systems. Cost-conscious consumers wary about buying yet another TV device might be more inclined to use something integrated into a familiar device such as a DVR or game console. In fact, if the long rumored Boxee on PS3 comes to fruition that could prove to be the most popular option.

Whichever device or combination of devices ultimately achieves dominance, 2011 will see increased adoption of web-distributed programming on the family television.

3. The Rise of the Linear NETwork

With web-based content gaining mainstream appeal and prominence on the living room television, the rise of a 24-hour linear NETwork is inevitable. Much like the early days of cable, the content, at first, will be less than amazing and often repeated; however, as advertisers become more comfortable investing in the programming the quality will improve.

Frankly, the web series that are being created now are better suited for a television than a computer. Unlike the early days of lonelygirl15 web series now tend to be longer, filmed like traditional television, and by-and-large not interactive. Shows such as The Guild or The Bannen Way have production values and a format that works equally well on a television. Lastly, online video in the minds of most people is synonymous with cat videos and home movies. For that reason, original web series do not receive the respect and attention many of them deserve. Being placed on equal footing with existing television programming will help alleviate that problem.

Just as there is a likelihood of a new NETwork rising to compete with cable and over-the-air television, there is the possibility that an existing cable network will devolve from a cable channel to a web channel. Admittedly, the likelihood that this will occur by year’s end is slim; however, with the speed at which the web moves, there is still a strong possibility.

Cable channels have a long history of difficulty with cable providers. Even large corporations like Fox have had fights with different cable providers over rates and channel location. For a small channel that has limited market penetration and or low viewership or caters to a niche audience, the opportunity to downsize from an expensive cable operation to a web distribution with a potentially larger audience with less overhead could prove very attractive. Of course, the ability to do so hinges largely on how much and how quickly consumers adopt set-top boxes that provide web content and the willingness of advertisers to gamble on web-delivered content. However, an existing channel, one that already has contracts and relationships with advertisers, is in a better position than a startup.

Whether it is a new channel or an existing one, 2011 will see the creation of a new NETwork delivering 24 hour television programming over the web. There exists already a few websites such as Crackle that could make the transition. In either case, such a network will be a boon to web series.

For all the talk of new networks, distribution channels, and web TV—at the end of the year—YouTube will still dominate online video. Ever since its launch in 2006, YouTube has been the destination for online video, a trend that is not likely to change anytime soon. YouTube’s closest competitor is Facebook; however, Facebook lacks a central place for viewer videos and is more suited for sharing content between friends.

While YouTube will continue to dominate online video, other sites will make inroads. For instance, Blip.tv is carving out a nice niche for itself in regards to original content. With an attractive CPM available to all users, not just partners, Blip is a viable alternative for original content producers looking to make money from online video. Furthermore, AOL recently announced a major push into online video production and distribution. Nevertheless, YouTube has continued its dominance and has taken steps to maintain it this year. In addition, to improvements to the site, the company has increased the allowed size and, recently, the allowed length of uploads. The higher quality and longer run time were both necessary improvements needed to accommodate web television.

There they are five predictions for 2011. Next year we will take a look back and see how well we did. In the mean time, I would love to read other people’s predictions in the comments below as to what they think 2011 holds in store for web series and whether or not you agree or disagree with our predictions.

[Next up is Tubefilter Editor Marc Hustvedt’s bold bets on the year ahead.]