Will Obama and Boehner Sip Slurpees at 7-Eleven’s Summit?

The GOP made gains in the Senate and took majority control of the House of Representatives after the 2010 Mid Term Elections on November 2. President Obama was asked during a November 3 press conference if he would invite soon-to-be Speaker of the House John Boehner to the White House to talk bi-partisan politics over a Slurpee. The president of the United States of America responded with, “They’re delicious drinks.” On November 4, the Slurpee Summit was born.

It’s not often your product is endorsed by the Leader of the Free World. 7-Eleven – distributor of the sugary sweet icy beverage since 1964 – jumped at the opportunity, launching a multi-city bus tour promoting unity amongst Americans and sipping Slurpees as the catalyst for political harmony.

The Slurpee Unity Tour started in Dallas and will make its final stop in DC on November 18. Along the way, Slurpee host and enthusiast, Mike McLendon handed out thousands of ounces of free Slurpees and preached a message of social agreement embodied by 7-Eleven’s newly designed flavor, Purple for the People. Writers and camera crew were in tow to help script and document the trip for an original web series.

7-Eleven marketing executives knew they needed to act quickly and build off the Slurpee momentum provided by the President. When it came time to hire a production crew to make the web series happen, they went with a talented company whose work they liked. They immediately made contact with Happy Little Guillotine Films – the production company behind 7-Eleven’s last web series, Road Trip Rally – and less than a day later Happy Little Guillotine principal, Yuri Baranovsky and producer, Justin Morrison were on the ground in Dallas to start the show.

I was able to pin Baranvosky down during Slurpee Unity Tour pit stops and in between brain freezes to ask him a few questions about the web series and American politics.

Tubefilter: Tell me the basic idea behind this Slurpee Unity Tour.
Yuri Baranovsky: When President Obama mentioned the Slurpee Summit, it was in the theme of unity, of working together with both parties to get something done. That struck a chord with 7-Eleven. The basic idea of the series builds off of that. As the Slurpee caravan travels from Dallas to DC passing out free Slurpees and spreading unity, we follow our host, the great and ridiculously witty Mike McLendon, as he travels alongside them. Mike travels by land, and even by helicopter, to speak to people across the land and asks what unity means for them. 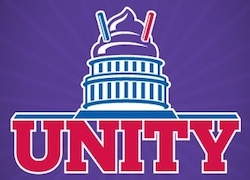 TF: How’d you get involved?
YB: Let me first say that I have to credit Blip.tv once again for getting us this job. While they aren’t involved in this particular project, they are the reason we were ever considered for it and I am eternally indebted to them for that.

The people who put this together – 7-11, their ad agency, TracyLocke – were also the ones that put together the 7-Eleven Road Trip Rally, so they knew us, they knew we worked fast and got results, and they knew we would go above and beyond the call of duty to give them the best possible content we could get.
We had around 12 hours between the call that they need us and Justin Morrison (one of HLG’s Producers and our Director of Photography) landing in Dallas to start shooting the launch of the tour (the rest of us joined them on Saturday morning in Kansas City) and since then, I think we’ve created a really fun show that’s both funny and, I think, meaningful and touching.

TF: What’s life like on the road?
YB: It feels a little like we’re on an actual campaign trail. We wake up early, we have banners, we have a guy talking to crowds of people about unity, we have press at every location – it’s absolutely insane. That said, It’s been a blast. We’re all exhausted, we’re shooting, editing and releasing episodes daily, but we get to talk to incredibly cool people, do Daily Show–esque bits, and actually have a nice message behind it all.

But to give you a good example of the road – I’m responding to these questions at 1 AM after hosting a Rap Battle last night in New York City, getting four hours of sleep and then driving 7 hours to Richmond, Virginia to do another event. Vote HLG Films for President!

TF: Compare and contrast this to the Road Trip Rally web series.
YB: It’s very similar in that it’s a lot of the same crew, and even one of the contestants from RTR – Mike McLendon. It’s different in that it’s smaller – with only a 6 man crew (as opposed to 12 crew and 4 contestants on RTR) – and, the biggest thing – it’s not a reality show. We hired Mike because he’s a fantastic improviser and he is in no way a contestant on this, he’s our host. We work with him to develop ideas for the episodes and he has a very active role in the whole thing. If Jon Stewart is watching – you have to hire this guy.

The press coverage is also insane. It’s been in newspapers all over the country and the DC event is going to be crazy. Especially if President Obama shows up – then I can proudly say that we’re the first web series to star a President. It’s really an honor to be part of it, and a whole lot of fun.

TF: 7-Eleven’s Road Trip Rally cost $1 million, all-in. Can you give me any details on the budget for the Slurpee Unity Tour?
YB: It’s sixty billion dollars. No, that’s not true. I have no idea what the budget for the entire campaign is – but our production budget is proportional to the Road Trip Rally. I can’t reveal it, but I CAN tell you that our bank is going to get a large Slurpee deposit in the near future.

TF: Is this 7-Eleven’s own Rally to Restore Sanity and/or Keep Fear Alive?
YB: I think there’s a hint of that, but I think the message is really about unity. With Jon Stewart and Stephen Colbert, they use satire to spread their message, which, I think is, you know: let’s compromise, let’s be smart, let’s not freak out and throw each other in the fire – we’re in this together.

Satire and comedy are what we’re known for as well – and there’s definitely an element of that in the Slurpee Unity Tour. But, the heart of the show, the main theme of it is really the idea of unity. It’s actually been really powerful to hear the majority of the country’s take on unity – it’s very eye-opening. Everyone has talked about working together and everyone seemed weary of politicians misrepresenting them. Unity went from being a buzzword to something Americans want and need and that’s fairly amazing for me to experience firsthand.

TF: How do you think President Obama and John Boehner will react if they show up to your event in DC?
YB: Ideally they’re going to drink the Power for the People Slurpee, together, from one giant pink straw.

The President’s official meeting with the Speaker of the House in waiting was originally scheduled for November 18, but it’s since been pushed to November 30 due to scheduling conflicts. That’s not, however, stopping the Slurpee Unity Tour.

Slurpee trucks will be parked Thursday morning outside of Union Station serving red, white, blue, and purple Slurpees. Live music and entertainment meant to unite America’s political leaders will continue on into Thursday night. Raise your icy beverages to hoping President Obama and John Boehner swing by and the message of unity has some effect.