‘ControlTV’ Tries to Define Reality on the Web 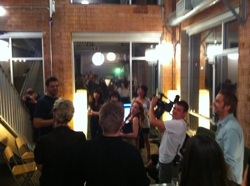 A cocktail party so crazy you have to sign a waiver just to get in?

I was intrigued. Intrigued enough to hop on the freeway a few miles up to a dark corner of North Hollywood to find the undisclosed home base of the web’s latest live-streaming reality show. Walking up to the three-story loft building it became clear this wasn’t going to be my run-of-the-mill Saturday night drinks at a friend’s place.

Before entering the ControlTV loft, I’m hustled into a back room filled with producers and burly PA types ushering me through a waiver and some ground rules. “Try to keep this PG-13,” said one of the younger producers on duty that night. “Just basically don’t drop the f-bomb too much.” She mentions the 30-second delay on the live stream they’ve set up just in case we get out of hand.

And we head in to the loft, the super-wired 24/7 live set that the web’s Truman Show guinea pig Tristan Couvares has called home for the past five weeks. Walking into this party I can already sense the air in the room isn’t quite normal. The twenty or so guests already there stop as we enter for host Tristan to welcome me and and offer a beer. He did after all, have an etiquette coach consult him earlier that day. 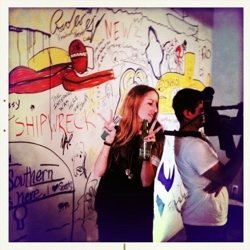 We all try not to acknowledge the 30 or so cameras that are conspiciously placed throughout the loft as we carry on our party talk. It isn’t easy. Every few minutes someone catches themselves saying something they shouldn’t, briefly glancing up to big brother in the nearest semi-hidden camera. One guest gabs on about her car before catching herself awkwardly to give a shout out to Ford, one of the show’s three sponsors. Sprint and Snickers are the other two main backers.

Inside the Sausage Factory

For some viewers the more intriguing part is the always-on, behind-the-scenes making of a reality show that’s the real draw. Of course, it’s basically watching sausages get made—the painstaking re-takes of the confessional interviews remind us how produced the edited episodes really are.

That’s the key difference from Jim Carey’s Truman—Tristan not only knows the 24/7 crew is all around him, he openly chats them up as they set up their staged events. (Like tonight’s poker game that Tristan is hosting with a few card sharks.) 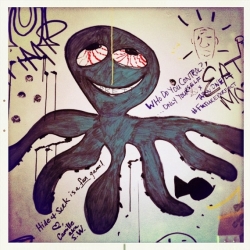 Seth Green is one of the creators of the series, and we had a chance to sit down and pick his brain about his vision of his always-on internet show:

That’s the benefit of doing something online—you have immediate transference of information. You don’t have interactive television to this degree. No one would make appointment television to watch a show that they could be watching streaming 24 hours a day at their own convenience. Anybody at any point in the day can hop on Tristan’s feed and see what’s happening. Anybody at any point in the day can get a note on their phone that says “a, b, or c?” and they can participate in that vote or not. It’s entirely up to the user. You don’t get that same type of experience with television.

As for the voting, viewers get three choices every half hour or so, picking everything from where Tristan should take his date for dinner, what he should wear, to how he should be woken up. “This is a truly democratic effort,” wrote producer Richard Saperstein. “We set out to make a show for the viewers, of the viewers, and by the viewers.”

So far, the gamble seems to be paying off. Early numbers from the series producers claim 3 million completed video views on the episodes so far through the first 14 days, which us Digital Broadcasting Group’s network as their primary distributor. (The ControlTV YouTube channel is pretty dormant with fewer than 3,000 views.)

Listening to Tristan slog through his confessional interview today with the producers, it’s clear the dating game is wearing thin on him. Like their reality TV counterparts, the ControlTV staffers seems obsessed with instigating some steamy drama into the show. Every episode works in some new eligible lady prospect, with Tristan later asked to opine on how it went.

To me, it’s a sign of a show that is still looking for what it is. Ten years of forced reality hookups, breakups and freak outs have warped our perception of what reality show should be, and its remnant effects on this web show are apparent. To be sure, Tristan’s a 25 year-old single guy who just moved to LA, and dating is part of life, but “it can be tough to date in this little bubble that we’re in,” Tristan admits.

Either way, there’s a lot more to be explored than whether or not he’s going to ask out Mikeala Hoover (see above). With one week left in this season, we might have to wait for Season 2 to really break free from the dating game.