Mindy Kaling, B.J. Novak of ‘The Office’ Give Us Sneak Peek of ‘The 3rd Floor’ 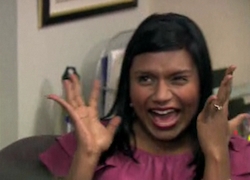 The series, which is scheduled to premiere October 21, released a sneak peek trailer on NBC.com today. The series stars and is directed by Mindy Kaling (Kelly Kapoor), who starred in Subtle Sexuality and House Poor on StrikeTV. Joining Kaling and Novak in the cast are Ellie Kemper (Erin Hannon), Kate Flannery (Meredith Palmer) and Brian Baumgartner (Kevin Malone).

This past Tuesday Kaling appeared on The Tonight Show and expained to Jay Leno why she might not be able to watch her own creation:

The problem with me in being in and directing horror series webisodes is that I can’t watch them because they terrify me so much…the images get ingrained in my head forever, and I just replay them in the shower, on the drive to work, and then it haunts me.