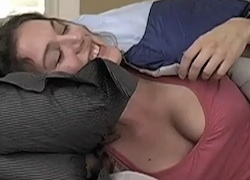 ‘In the Bedroom,’ the 433rd episode of lonelygirl15, just broke the 50 million view mark on YouTube. The video is also currently number 13 on the all-time most viewed list for the Entertainment category and the 81st most viewed video of all time on YouTube.

Jonas (Jackson Davis) posted the video on March 7th, 2008, where it quickly racked up the views and continues to do so, averaging approximately 80,000 new views a day some two years after the conclusion of the series.

Granted much of those views can be attributed to the provocative title and enticing thumbnail (which the LG15 producers inserted as a flash frame into the exact center of the video – at the 1:26 mark – so YouTube would be sure to grab it). The image features a suggestive shot of Jennie (Melanie Merkosky) in bed. Also, the video contains one of the series’ more memorable surprises as well as an important plot point.

In a time when most web series are lucky to gain 5,000 views, the fact that a single episode of a series has reached the upper echelons of popularity on YouTube should inspire fellow web series producers. If nothing else, it clearly demonstrates the importance of a good image to entice clicks. After all, breasts evolved for thumbnails.