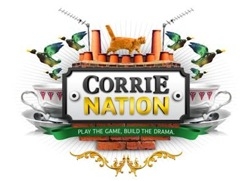 ITV Studios announced that on November 1st, they will be launching Corrie Nation, a social networking game based on ITV1’s incredibly long-running soap opera Coronation Street. Initially, it will only be available on ITV.com and Facebook, but other platforms are expected to follow.

Created to be a “parallel world” to the TV show, players will build and manage the famous neighborhood of Weatherfield and its populace with gameplay that sounds like a cross between The Sims and Sim City… with a dash of Days of Our Lives thrown in. Your “understanding of what builds drama” will help you get the highest score.

I have no idea what that means, but I’m certainly intrigued.

Part of the fun seems to be the interaction between the show and the game, since you can play as your favorite characters and make them do what you think they should be doing in current storylines. Based on what people make characters do, a consensus poll will illuminate what the audience thinks should be happening on the show. I’m unclear on whether audience opinion will actually reflect what happens on screen, but it does seem one step closer to a choose you own adventure method of storytelling.

But even if gamers can’t affect what’s happening on screen, they will at least be able to learn about plot points ahead of time by exchanging game points for storyline spoilers, which will be presented in the game as “psychic predictions” from characters. Over 60 characters both past and present of the long running soap will be available for fans to use in their game spaces.

All in all, it sounds like an intriguing addition to the world of the show, and an interesting way to keep viewers actively engaged in a show—even when it’s not currently airing.