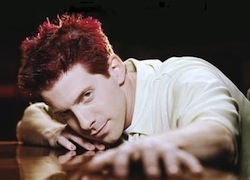 In June, at Digitas’ Digital Content NewFront, the Emmy Award-winning creator of Robot Chicken pitched his idea for an online original program to Madison Avenue’s finest.

At the time, he called the project URule. Green billed it as “The Truman Show, except that Truman is a willing volunteer,” which basically means Green and co-creator Matthew Senreich would cast a typical, single, unemployed 20-something male and then monitor him 24 hours a day for a six week period. His every choice – from what underwear he puts on in the morning to which potential sexual partners he should encounter – would then be decided by online, real-time voting mechanisms and a live, internet audience.

Within the past three months, the name’s changed from URule to ControlTV and the show’s been greenlit for production. The Ford Motor Company and Sprint Nextel are footing the bill. While ControlTV‘s yet-to-be-named star looses his free will, he’ll be driving the 2011 Ford Fiesta and talking on Sprint’s HTC EVO 4G Phone.

Voyeurs will be able to watch ControlTV anytime, but highlights of each day’s events will be edited into an episode of the ControlTV web series. Digital Broadcasting Group (who’s also listed as an Executive Producer of the program) will then distribute the episode across its video network. Production is slated to begin this Fall.

If the premise of the show sounds familiar, that’s because it is. At the beginning of August, YouTube Rubik’s Cube sensation, Dan Brown and new media studio, Revision3 launched Dan 3.0. For a full year, Brown will be bound to attempt whatever feats the Revision3 community at large desires. Viewers propose tasks on the Dan 3.0‘s channel, Brown accepts the ones with the most votes, and documents his efforts in daily videos.

So far the series is doing well, racking up over 40,000 views per episode on Brown’s YouTube channel and, according to sources, at least as many views on Revision3.

The Hollywood Approach vs. the Web Approach to Online Video

ControlTV and Dan 3.0 certainly share some similarities, but it’s more interesting to look at their differences. They approach online video from two distinct production ideologies.

ControlTV comes from Hollywood. The show was pitched, refined, and pitched again to potential sponsors for at least a year before any type of production took place. Its star hasn’t yet been announced. The series will last for six weeks. Distribution, promotion, and all other media efforts will treat the program like a theatrical release, trying to get as many view counts as possible within that 42-day window.

Dan 3.0 is born and bred on the web. One day, Brown decided to create the show, using mostly his own resources to make it happen. Before he launched, he pitched the program to Revision3. They saw an opportunity and decided to come along for the ride. Brown has a sizable YouTube following that guarantees him tens of thousands of views per episode. The show is inexpensive to produce. It will be produced for 12 months, giving it more than enough time to grow organically and bring relevant sponsors in along the way.

I’m not saying either one of these approaches is better or has the potential to be more successful than the other, and it’s certainly not a zero sum game. ControlTV and Dan 3.0 could both become case studies on how to create a hit online video show. But the dissimilar origins and execution of each program are worth noting.

Come the conclusion of Dan 3.0 in August 2011, we’ll have a better idea of which show and what approach to online video came out on top.