BlackBoxTV: Be Afraid, Be Very Afraid of Phil DeFranco’s Dark Side 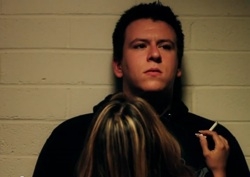 Though the website has been up before now with a few behind-the-scenes videos, yesterday marked the official launch of BlackBoxTV, as their first episode went live in the afternoon.

The brain child of Philip DeFranco (The Philip DeFranco Show) and director Tony Valenzuela (Zombiez, 2009: A True Story, Harper’s Globe), the official website describes BlackBoxTV as “a series of video short stories that reach into the subject of fear. The things that terrify us and the things that make us want to curl into a ball and call out to our mothers or God or whoever we believe can save us.”

If the first episode is any indication, the description is apt, and we may have the web heir-apparent to The Twilight Zone—a smart, dark speculative fiction anthology with a premise that seems versatile enough to jump from straight-up horror to thriller to sci-fi from episode to episode, with “Do Over” (episode 1 – above) falling very much into Hitchcockian psychological thriller territory.

No surprise, then, that Valenzuela himself is a big Twilight Zone fan: “I’ll never forget the first time I saw “Nightmare at 20,000 Feet”. I was 7, and that episode had aired during their annual Thanksgiving marathon. I spent the next week sleeping with my pillow up against my parent’s bedroom door because I was so afraid.”

Besides scaring your pants off, Valenzuela wants to use the series as an opportunity to put YouTube stars in an environment you wouldn’t normally see them. Episode 1 features DeFranco and Exotic Jess as the leads (the first time they’ve worked together); iJustine and Shane Dawson will star in episodes 2 and 3, respectively. Joe Nation has shot every episode so far (on a Canon 7D) and will direct at least episode 5.

“I’m excited to be getting the chance to direct some of my favorite YouTubers,” Valenzuela says. “To finally have a platform to showcase their talent in a way most people haven’t seen before.”

And episodes are only the beginning for this series—the creators will release a behind-the-scenes video and director’s commentary with each episode, along with weekly written content on the site itself. If that wasn’t enough, their creative team is also openly courting
audience interaction, planning to end each episode with a question for viewers to answer that will open up a dialogue on the nature of fear itself. And they have a submission section where anyone can send in story ideas for BlackBoxTV to use as future episodes.

“BlackBoxTV is not about views or brands or trying to repeat the success of others. It’s about creating the kind of show that I’ve wanted to see online for a long time.”