An ARG Trailhead? ‘Let Me In’ Trailer’s Missed Opportunity 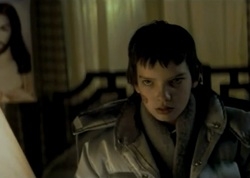 While we can fantasize about a Twilight movie we’d actually watch, a lot of the glitter-backlash was, luckily, channeled into Swedish vampire film Let The Right One In.

In the infinite wisdom of studio executives, they’ve decided to make an American version, retitled Let Me In (because I guess “the right one” was just too… I don’t know, I’m not even going to try to figure it out). What’s interesting is the choice of director: Matt Reeves, who made his debut with the JJ Abrams-produced Cloverfield (which, those of you who were rabid enough to first translate, subtitle, and then watch the Polish n1ckola version of lonelygirl15, may remember had an enormous Alternate Reality Game).

Enter the trailer (above) – watch it to the end.

I think it’s safe to say after the first scratch on the chalkboard I was already bringing up a morse code translator on Google. Unfortunately, all it says is “HELPME,” which, while nice and creepy and great to get people engaged, was a missed opening for an ARG that probably doesn’t exist. With the release date being in October – and I’ve got to assume it’ll be in the run-up to Halloween – now would’ve been the time to let the trailhead be found.

The morse code knocking, in case you’re wondering, isn’t a shoehorned in method of making something more web-friendly, but actually a good part of the story itself. So, ARG-creators, take note of this trailer. This is how you do a trailhead.

Only, when you guys do it, you actually, y’know, have a trailhead to release.