‘Universal Dead’: What An Ex-CIA Rocket Scientist’s Web Series Would Look Like 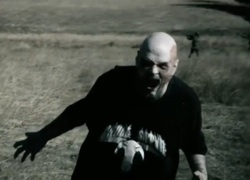 Web series are often the passion projects of those who create them and can become a reflection of their backgrounds and talents. After all, the adage is “write what you know”. So imagine what kind of web series would come out of someone whose short bio is “I am America’s only ex-CIA, rocket scientist, stand-up-comic screenwriter. No, really.”

It’d probably look something like Universal Dead. Reminiscent of the classic zombie storytelling of George Romero, the series opens on a breathtaking helicopter view of a ravaged landscape. We quickly learn that the planet is consumed by a strange disease that turns people into mindless murderers. A small team of US Navy SEALs must protect a doctor from the Center for Disease Control on a mission to evaluate the claims of an erratic scientist who may have discovered the secret to mankind’s salvation.

Let’s go back a second: this show opens with a HELICOPTER SHOT. According to ex-CIA, rocket scientist, stand-up comic creator Kelly Parks: “That shot was taken by Ace Underhill, our very brave DP, while hanging on a harness out the door of a helicopter.”

And not to tote this as just a flashy sci-fi romp with no substance, the show also has the writing and acting talent to back it up. The show features DB Sweeney (The Cutting Edge, 24), Doug Jones (Hellboy, Hellboy II, Pan’s Labyrinth), and Gary Graham (Alien Nation, Star Trek: Enterprise). The story not only focuses on dealing with the epidemic itself but the relationships between those trying to find the answer to its cause and its cure. By episode two, a love triangle between a zombie (female) and two of the main characters (male) is revealed.

With only two episodes publicly available, the show has already garnered a lot of attention. The show was featured on io9 not once but twice as well as on Fear.net. Its has been mentioned on dozens of sci-fi/horror fan sites, including sites in the UK, Portugal, Spain, Italy, France and Germany.

Parks told Tubefilter that the third installment of the series is due out at the end of this month and revealed that: “we are in negotiations with Jeff Fishman, a Paramount Lot producer, to sign a co-production agreement to make Universal Dead as a feature film”. Parks is also working on a western called The Sorrow, which goes into production in August and is shopping around a sci-fi/horror alien invasion story called Howard’s Cross with comic book legend Jhonen Vasquez (creator of Invader Zim) attached to direct.