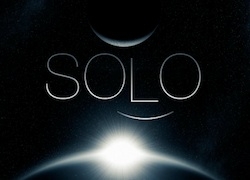 On this week’s episode of The Web.Files, host Kristyn Burtt attends the red carpet premiere for SOLO: The Series. Among those interviewed on the red carpet are Jonathan Nail, the series creator and star, Michele Boyd, who plays Nail’s patient and long-suffering wife, Rob Gokee, who composed the majority of the series’ music as well as many other members of the cast and crew. In addition to the interviews, there are a number of never before scene clips from the series. Well, never before seen unless you attended the premiere.

SOLO: The Series is a highly anticipated sci-fi comedy created by and staring Jonathan Nail. The series centers on Scott Drizhal, who is selected to take part in a three year solo mission to Mars as part of a reality TV show. Unfortunately, 36 days into the mission the show is canceled and Drizhal is left alone with only a wise-cracking AI named Phal 9000 to keep him company. Meanwhile back on Earth his gracious and meek-tempered wife, played by The Guild’s Michele Boyd, seeks to have him declared legally dead so she can claim the insurance money.

Will Drizhal make it safely to Mars and (more importantly) will his show be picked up by another network? Only time will tell.