We Lost Our Gold takes a different approach. The soon to be released web series hunts treasures with the help of puppet pirates, a puppet ninja, and you. 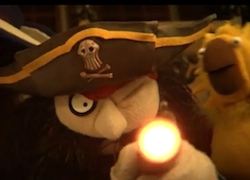 If the website is to be believed, the creators of We Lost Our Gold have buried a wooden chest filled with $10,000 worth of Sacajawea and John Quincy Adams US$1 coins somewhere in the five boroughs of New York City.

Beginning August 1, eight weekly videos will be released telling the tale of a bumbling crew of ne’er-do-wells attempting to retrace their steps to find their lost riches. Clues and easter eggs will be hidden throughout the episodes. Decipher their meaning, obtain a shovel, and find the “X” that marks the spot to become $10,000 richer.

If the website is not to be believed, the web series still looks fantastic. High production value puppet pyrotechnics coupled with pirate accents, a ninja, and a storyline cloaked in mystery is enough to pique the interests of nearly everyone on the internet.

So, do you think it’s real? There are plenty of “this is for real!” entreaties on the website, but you can never be too sure. If you want my advice, I suggest you consider the whole thing a sham. With less people digging, that’s only going to increase my chances of finding the treasure.