Review: ‘Quiet Desperation’ Gets Real, But Needs To Be Real-er

If you try to watch Quiet Desperation via the show’s main hub, it becomes a bit of a hassle. So, before I talk about the show, and in the interest of eradicating poor website design for web series, let me lay down a few pointers:

Anyway, back to the show.

Quiet Desperation bills itself as “a reality sitcom about struggling artist types in the Greater Boston area doing what they need to do to get by.” Right away I’m interested, but the word “reality” is troublesome. Within the first couple minutes of the pilot, that word is shown to be false – utilizing many tricks of the “faux-documentary” trade as mastered by The Office and Parks and Recreation. Even if it’s unscripted, there’s no sense of “real” people doing “real” things.

While it’s great to see the Boston music/art scene (centered in Allston, a neighborhood in the western part of the city), and I will never say that there’s no worth in a show taking place in a distinct but underutilized (for web) locale, it falls victim to forced comedy. There are plenty of jokes in Quiet Desperation that are funny, but the delivery – such as the flamboyant Mehran character – is very over-the-top. It feels as though the writers are commanding you to laugh. 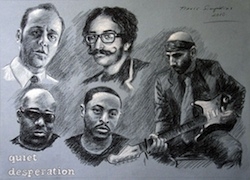 Instead of a “reality sitcom,” I would’ve liked to have seen the show actually go true documentary. This is an interesting place with interesting and outgoing people – why try to force us to acknowledge that? When I wrote about Squatters, I wrote about confidence. With Quiet Desperation, I expected there to be more melancholy, buoyed by the humor of the typical struggling of artists – but these artists are playing other characters than themselves.

The show’s gone twenty-three episodes without really pulling any criticism, and while its purpose is to stop the “brain drain” in Allston (Jared Leto, Janeane Garafalo, Aerosmith and others came from there), I think it could be more meaningful if it felt more real.

The Boston Phoenix wrote up an article that really told me something:

I don’t know who Chance Langton is – why is he an old-school comic still living in Allston and featured on a web show about struggling artists? That’s the story. That’s where the desperation and humor can stem from. The Phoenix article also notes the actors are given a choice to play themselves or a character. I think that choice takes the edge off. Are they uncomfortable with playing themselves? Good. Why does showing their true selves to the world – when they’re artists – bother them?

Even if it’s still using contrived plots and pre-written gags, I want to know who Chance Langton is. And who Rob Potylo (the creator) is. I want to know these people, not the wacky characters they’re being set to portray.

Now let’s get positive: Quiet Desperation is very well-shot, and in later episodes uses a number of locations that are objectively cool. When they aren’t trying to force us to pay attention, there are moments of real desperation. Even in comedy, truth is key. The show should be funny for funny’s sake, because the people living in that neighborhood need to laugh – it’s the only way to keep them from crying.

Win, Fail or Trainwreck: It alternates between Win and Trainwreck. They don’t fail at what they intend to do, it’s just this show’s voice misses what could make it great.