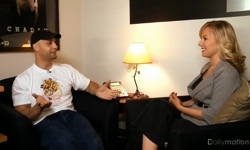 On this week’s episode of The Web.Files host Kristyn Burtt interviews Jace Hall, executive producer of the recently released animated web series, Chadam, as-well-as Blake Calhoun, creator of Exposed. Both series debuted this week on TheWB.com. Among other topics, Hall discusses how the series was able to produce high quality animation on a web series budget through use of the Unreal game engine originally designed for computer games. Calhoun appeared via Skype in the series first long distance interview, and appropriately enough discussed his experiences working in web series outside of the dreaded LA bubble. The only downside to the interview is that considering she was speaking with the Dallas based Blake Calhoun; I was hoping Kristyn would be wearing a cowboy hat.

Chadam is an animated series set on the hyper-stylized island city Vulture. The titular character is unique in that he has the ability to warp his environment based on his imagination. The series boasts impressive 3D animation and a stellar cast of voice actors that includes Katey Sagal, Carl Weathers, and genre favorite Jeffery Combs. Exposed centers on Henry an Ivy league pre-med student whose charmed existence is threatened when he receives a series of mysterious phone calls telling him to do increasingly dangerous tasks or risk having his darkest secrets and true identity reveled. Both series are part of the TheWB.com’s summer lineup of original web series content, which debuted June 15th.