Last night, Electus unveiled the first episode of its new branded entertainment series from Jason Bateman and Will Arnett’s New York based production company, DumbDumb. Sponsored by Wrigley’s Orbit gum, Dirty Shorts was created, directed, and executive produced by the duo. They also saw fit to cast themselves in its first episode, ‘The Prom Date,’ which examines “the dirty world of student and teacher dating – and how the parents of the student involved react.” The show will be distributed on YouTube. 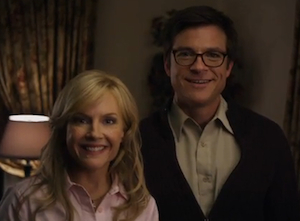 In January, DumbDumb sealed a production deal and funding from Electus. The brainchild of former NBC Entertainment Co-Chair, Ben Silverman, the IAC-backed studio, which was announced last summer, has secured distribution deals with Yahoo and recently launched SoBe Studios, in partnership with PepsiCo and CollgeHumor, another IAC property. The studio has also broadened its horizons into television and will launch Pedro & Maria, an interactive telenovela sponsored by Proctor & Gamble, later this year.

Bateman and Arnett took the stage at Digitas’ NewFronts in New York City this week to pitch their wares to the brands in attendance. “I think you have to be a little more obvious with humor on television. On the internet, they’re willing to find the funny. That’s the stuff that makes us laught a little bit more. People are more predisposed to find that or look for that online,” said Bateman.

Orbit Gum, a member of the Wrigley family of brands, hasn’t shied away from supporting edgier content in the past — in fact, their ad spot on MTV’s Movie Awards on Sunday night was welcomed as a perfect integration into a show filled with expletives. The gum’s tagline, ‘Dirty mouth? Clean it up, with Orbit’ couldn’t have been a better fit. In Dirty Shorts the gum not only gets a generous amount of air time, but it also plays a significant role in the plot of the first episode.