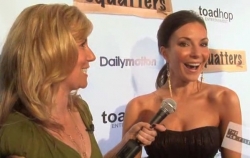 On this week’s episode of The Web.Files the lovely and talented Kristyn Burtt interviews the red carpet guests attending the premiere of Dailymotion’s new comedy series, Squatters. For those unfamiliar with The Web.Files, it is a weekly web series that gives audiences an inside look into the web TV space. In addition to hosting, Kristyn Burtt created the show along with the series’ producer, Sandra Payne (Life with Kat & McKay). Also, she looks fetching in a fedora.

Squatters is a show about two guys who make a bet to live rent free for a year in New York. And its online home, Dailymotion is a French video site is similar to YouTube, but with more nudity. (Oyez, I hope I don’t get fired before I get my Tubefilter new writer gift basket, complete with complementary Drew Baldwin headshot.) In addition, to the attendees sharing their thoughts on the series, many of them also share the strangest place they have ever woken up. Most of them are actors, so they are fairly strange places. Sadly, Kristyn does not share her strangest wake up place, but given the amount of traveling she does, I am guessing airplane bathroom. Furthermore, we finally learn the secret to getting one’s web series produced. The secret, have friends, especially ones with money. All-in-all, while not as insightful or probative as most episodes of The Web.Files, episode 40 is definitely worth watching.