Fore! – PGA Invites You ‘Behind the Greens’ 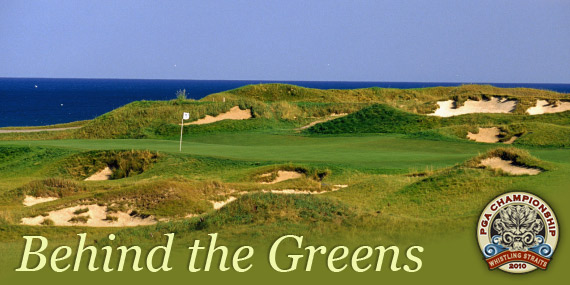 While web series are no stranger to the world of professional sports, there has been a noticeable dearth of programming catering to fans of America’s most venerable game, golf.

Sure, FoxSports.com picked up the bawdy animated golf series, Of Course in February (which was released on MSN) — but something tells me that die-hard fans of the game might be looking for something a bit more, well, serious.

Enter Behind the Greens, the PGA’s behind the scenes look at preparations for the 92nd Annual PGA Championship which is set to take place at Whistling Straits in Kohler, Wisconsin, August 9-15.

“It’s a behind the scenes look at creating and constructing the championship,” said Scott Silvestri, executive committee member for the 2010 PGA Championship, “through the eyes of the course superintendent, the operations manager and the tournament director.”

With $7.5 million in the tourney pot, and the possibility that Tiger Woods might actually play, the stakes are set for a very dramatic week of play. The question is, will the one-camera series, with full behind the scenes access, satiate the appetites of golf’s legion fanatics?

The series, which premieres June 3 on PGA2010.com, will release episodes each week leading up to the championship, and follows tournament team members including Chris Zugel, Whistling Straits Course Superintendent, and Chris Vonderkall, Operations Manager, as they prepare for the event.

“This web series is an innovative approach to letting golf fans in on the behind-the-scenes tasks of what it takes to host a major championship on and off the golf course,” said Barry Deach, Championship Tournament Director, who will also be profiled in the series, along with PGA professionals Jim Richerson, Dirk Willis and Michael O’Reilly as they prepare to play.

The series is produced by Chicago based agency, Caffeine, in partnership with the PGA Championship.