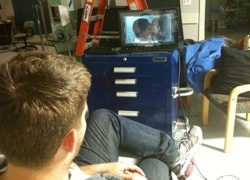 Tucked away in an alley of downtown LA, behind two intimidating buildings with “American Apparel” emblazoned on their sides, Central City Studio is hidden away behind a factory facade with a gigantic crane parked in front of it. If I hadn’t known I was looking for a production and recognized what I knew to be a grip truck parked near the crane, I wouldn’t even be aware there was a fully-functioning hospital set located within the building.

Here they were filming Asylum, the new project of Streamy Award-nominated director, Scott Brown. His first series, Blue Movies has now amassed over 2.5 million views and for his follow-up, he’s tackling a dramatic dark mystery created by Dan Williams. Williams and Brown were follow USC students, Williams produced Brown’s first short film. Tubefilter had a chance to visit the final day of shooting, a planned 14 hour day with a well-oiled crew that was unfortunately treated off to a rocky start. 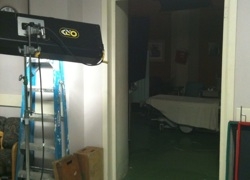 “There’s a pretty crazy story about what happened to us”, explained Brown. “We had a lot of preparation done. A month in advance we had scouted a location. We had this awesome hospital in Pasadena, they actually shot the 9th season of Scrubs there. We get the crew and they show up on Friday, we’re going to shoot Saturday. So literally 12 hours before we’re going to go to picture they arrive there and they are shooting another show … It turns out that 3 weeks ago, the owner we had the agreement with, who we had paid and everything, sold the place and didn’t tell us. But the producers really kicked butt and got us new places. We started shooting at Santa Clarita Studios, which is a full-service soundstage. Then we went to a place called Linda Vista and shot there two days. And now we’re finishing out here, on this set. We had to add a line about remodeling because we have two very distinct types of architecture in this building.”

Shooting on the RED One, the show boasts high production values and a script riddled with LOST-esque twists and turns. In fact, as Brown explains, the show has a lot of “blank meets blank” potential: “Imagine that House meets The X-Files. It’s about a hospital for the criminally insane but there is a sci-fi, paranormal twist to it. Basically, without giving too much away, you’ve got these patients that come in every episode who have a psychological condition that has resulted in them committing a criminal act. And in between, just like on House, the doctors are working on it and there is that doctor drama. Only our doctor drama has this paranormal, sci-fi edge to it. … It’s if Lost had doctors in it and they were trying to cure people.” 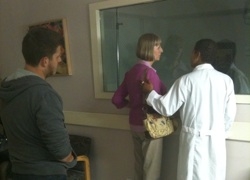 The show is working with a pretty quick turnaround time, with the plan to have the first episode completed in time for submission to the New York Television Festival. They are shooting 6 episodes to start with and then comes the search to find the series a home. I asked Brown about how we garnered funding for the shoot. “We reached out to people our age but who maybe didn’t pursue filmmaking,” said Brown. “So investors who are adventurous, who love the script, who want to be part of a production. We had a few people who were brave enough to give us our initial budget.”

The show features no known actors, a conscious decision by the production to keep a feeling of the asylum being an anonymous place. Actors were only told details of their characters they absolutely needed to know and were encouraged to try to figure out the mysteries for themselves as the shoot went on. “I think I was stunned when I got to watch some of the dailies at first because they were so magnificent,” exclaimed actress Rhobye Wyatt, who plays Dr. Tabitha Lewis on the series. “The color, clarity, production value is really high. Out of the few things I have done, it’s probably one of the more professional things I’ve done in terms of web series.”

“I don’t see how anyone could watch it and not be intrigued by it,” she concluded.