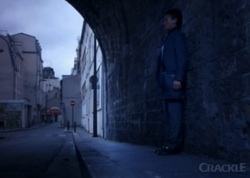 When an indie film makes a run through the festival circuit and scores a studio distribution deal, it’s a path so well trodden that it’s hardly worth batting an eye at. But for original web series, the nascent festival scene has but few examples of major pickups to point to. That is until the gritty, Urban Wolf and its creator Laurent Touil-Tartour made the flight over from France to screen at the Independent Television Festival last summer. “Have you seen that French series?” dominated the festival chatter, so much so that when the project made it to execs at Sony, they jumped on it.

Flash forward to today, as the 15-episode action drama debuts online with the first five installments on Crackle. Urban Wolf cuts to core of the post-9/11 surveillance culture in major cities around the world, hypothesizing a scenario where a joy-riding hacker can infiltrate the system for a deadly game of cat and mouse. Vincent Sze stars as an MIT grad arriving in Paris for job interview with an executive search firm. Quickly, the man realizes those ubiquitous cameras that canvas the airports and now almost every corner of the city are watching him. Someone is after him; the chase begins.

The French Connection brought to film one of the greatest chase sequences ever orchestrated. It was 1971 and yet still to this day Gene Hackman racing a comandeered Pontiac LeMans after a NYC Subway train shows its indelible marks on our modern day blockbusters. Cinephiles, yes, I’m aware that it was a) not in France or b) a car chase not a foot chase, but the comparison still stands. And in what to date is the most elaborate chase sequence—practically the entire 15-episode series—from an episodic web series, it begs the question: Webephiles, will this be the internet’s French Connection?

The tight four-minute installments are by design, according to Touil-Tartour, giving audiences succinct pieces of the story that complete mini-arcs within the broader chase. The choice for four minutes wasn’t some highly-calculated examination of what he thinks web audiences can swallow, he tells me, but rather a desire to emulate the length of a modern song. That would make the full season, therefore his complete album.

The first five episodes are embedded here for your review. A generous helping of the story taking us far enough along the chase to see just who is the man behind the cameras, and perhaps even his motives. There’s noticeably sparse dialogue, a nod to the international intentions for the project. Theoretically this could play just as easily in Europe and Asian countries as it does here in the States. New episodes of Urban Wolf roll out every few days, with the next one (Episode 6) set for May 14.

Urban Wolf follows a trend we’ve noticed this year where Crackle has been picking up fully shot web projects, rather than dropping dollars into producing them. After bowing the Sony-produced The Bannen Way back in January, it followed that up with the pickup and release of Stage 9’s shelved Trenches which came out this March. But Crackle says they still will be active in original production, with three Sony-backed web series—Backwash, Held Up and Jail Bait—coming out later this year.

[Disclosure: Crackle is an advertiser on Tubefilter News]