YouTube Recap: ‘The Station’ Relaunch, CollegeHumor and FailBlog Duke It Out

[TheWillofDC, Tubefilter’s weekly columnist brings his mastery of the inner workings of YouTube’s movers and shakers from his popular YouTube channel to you, our fine readers in a weekly dish every Friday. Will has two weekly web shows—’YouTube News’ and ‘YouTube Winners & Losers’—that appear on his YouTube channel and of course right here on Tubefilter News every Friday. Questions for Will? Leave a comment below.] 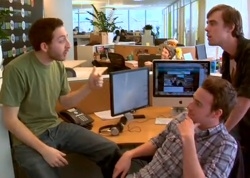 It’s been over a year that I’ve been doing Winners & Losers on YouTube and during that time I’ve seen a lot of people go up the top 100 and a lot of people go down and fall off of it. Everyone loves to talk about the competition of YouTube when in actuality it’s very rarely a competition, at least in the traditional sense. The current state of YouTube is such where a large number of “next generation” YouTubers are gaining immense popularity at a rate much grater than the original popular YouTubers, some of whom are stagnant or losing popularity. This scenario seems to be more adequately described as a passing of the torch rather than a competition. The only real competition I see currently on YouTube is that between CollegeHumor and FailBlog. On my show I like to call them the “frat boy websites” although it is obvious their viewership extends much further out than that simple demographic.

For a long time they have both been steadily climbing the top 100 and currently sit just outside the top 10. Yet what makes their situation immensely interesting and exclusively different from any other is the fact that practically every week they switch positions. Statistically they are always only a few thousand subscribers apart, or less. Currently CollegeHumor is ahead of FailBlog by less than 2 thousand subscribers. Yet, based on the past year, I can guarantee you in a week or so FailBlog will come out with a great viralish failvid and overtake CollegeHumor. Then a few weeks later CollegeHumor will put out a great video and re-pass FailBlog. What’s even crazier is that its been this way for as long as I’ve been doing Winners & Losers. So while these two channels are in a very vigorous competition I believe it’s also a partnership. A partnership because they have such a similar audience that when one channel has an immensely successful video the other sees rewards from it. I believe this is how everyone would like to see competition done on YouTube, with a spirit of collaboration and community. Yet when it comes down to it there can be only one top “frat boy website” and I’m very excited to wait and see which one finally comes out on top.

Normally people open obvious news with the cliché, “if you were living under a rock and missed this obvious news…” yet I think this time it’s quite apt to do so. Mainly because while it is obvious TheStation relauch was going to be news whenever it happened, it is especially newsworthy now because of how they are conducting it. When TheStation originally launched it was done with such grand hype, excitement and an expectation that set the bar as high as it could possibly be set. Many YouTube journalists have written about how the way it was launched is what led to its slump and stagnation at the end of last year. While that is an interesting theory I think its entirely too simplistic of the many factors, many uncontrollable that led to their eventual hiatus. Yet older and wiser they decided to relaunch without fanfare and without notice. This past Friday they put up a video and the only way the audience knew it was the relaunch was the end credits, which informed of the next week’s videos. In the simplest of ways they let the videos speak for themselves and looking through the comment section, everyone was thoroughly entertained. While trying to determine the success of the relaunch only 1 week after it happened is impossible the fact that they are now 8th most subscribed for the week proves they are in great position to finish the climb to the top they started almost 9 months ago.

This week comedian Charlieissocoollike passed make-up guru Panacea81 to become the new number 1 most subscribed user in the UK. Charlie has been with the site since Spring 2007 and with over 350k subscribers and 38 million views, he is an institution known throughout the YouTube world. Big congratulations to Charlie on his accomplishment.

End of The Philip DeFranco Show?

YouTube user sxePhil better known as Phillip DeFranco announced this week he was ending The Phillip Defranco Show. Skepticism ran high for those who have been with YouTube for a while because this isn’t the first time he’s announced his intentions to stop, end or move on from doing the PDS. Yet this time seems to be the real deal evidenced by the video he put up on Thursday titled, “The Last PDS and How we killed 55.8 Black people in 1787”. Phil is one of the original institutions on YouTube having joined the site in fall of 2006. He’s been doing the PDS for about 3 years now so it makes sense that he wants to progress into something new although we have no hints on what this new spin-off show he is launching Monday at 3pmPST will be about. It is almost certain though that everyone will be tuning in to watch.

Just weeks after Machinima.com’s channel Machinima amassed the impressive 1 billion total video views this week they crack into the 1 million-subscriber club. Massive congratulations to Machinima on all their success.