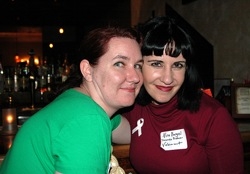 On April 15, 2010 a varied group of online entertainment creators gathered at the Acme Comedy Theater in Los Angeles to do something they felt needed to be done, to celebrate the innovative and creative content that is being produced and distributed throughout the internet. The event, organized by Kim Evey and Jenni Powell, was designed as a Post-Streamys Celebration to help get the web community back on track after a disillusioning weekend.

The celebrations was just that, a celebration, a place for creative people who love what they do to get together and share that not only with each other, but with a live streaming audience on the internet as well. The event, sponsored by blip.tv, Jinx.com, and the Acme Comedy Theatre, lasted just over an hour. Twenty one Streamy Award winners were represented either in person or via recorded video messages.

In order to insure the integrity and spontaneity of the evening speakers were selected randomly from names drawn from a Streamy Award itself. This playful attitude set the tone for a fun and uplifting evening. Common themes that were mentioned included the fight for net neutrality, the freedom of the internet, the ability to reach audiences that you may not otherwise be able to, and the ability to be true to your self.

After listening to the Streamy winners speak it was obvious that they deeply love what they do. The ability to not only create something from nothing but to share that with the world just by uploading it to the internet was a privilege honored by all.

The gathering after the event at Alfani’s restaurant continued the general vibe of camaraderie and festivity. The bar area was filled with so many creative people, excited to share their ideas and new endeavors with each other and catch up with old friends that there was barely room to walk. At the core of the celebration was a feeling of community, the acknowledgement that this is truly a family that knows each other, helps each other, and supports each other. It is this feeling of friendship and hope for the future that will help the web community succeed in providing quality web content for years to come.

For more, see some of the short videos contributed to the event or visit celebratetheweb.com to join the celebration.