‘The Nightly News at Nine with Phil and Sherry’: A LEGO-Lover’s Treat 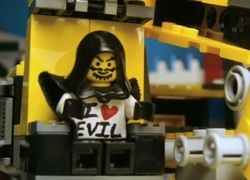 At the root of web series creation, there is the old adage “find your niche”. It is something that has shined through again and again in series from The Guild, The Legend of Neil, and GOLD: The Series (Gamers) to The Crew and Date a Human (Sci-Fi), Vamped Out (Vampires) to Riese (Steampunk), series catering to a specific community of people tend to find popularity (as well as containing an easy jumping-off point when it comes to markerting).

The Nightly News at Nine with Phil and Sherry is almost a niche within a niche: it’s a parody of news shows on the one hand…on the other, it’s a stop-animation where the characters and sets are completely made of LEGO building blocks. Tubefitler spoke with the show’s producer, David Pickett, via e-mail about this unique and fun series: how he choose the format, it’s popularity among LEGO fans, and his plans for it going forward.

Tubefitler: What inspired you to do a LEGO based news show?

David Pickett: I’ve been making videos using LEGO bricks since my family first got a VHS camcorder in the early 90s. In college I made a couple feature length animations. When the first one debuted on the big screen at our campus movie theater, I sat in the dark listening to everybody laughing and it was the best feeling ever. That was the moment I knew this is what I wanted to do with my life. I’ve toyed with live-action and animating in other media, but I always come back to LEGO bricks.

Of course, making a feature-length stop-animated movie takes a long time, and making a good one takes ever longer. My early films may have been long, but they lacked focus and polish. I had trouble focusing on anything for very long, both in production and the narrative. Rather than trying to change my style to fit the form, I searched for a format that could incorporate sudden tonal shifts, random tangents, lots of world building and zany characters. The news format ended up being the perfect fit. Doing a fake TV show also lets me do fake commercials which are even more frantic and fun.

DP: I operate out of my apartment on the North Side of Chicago. I do most of the animating on my kitchen counter and edit in my bedroom or on the CTA. My animating supplies are relatively mobile, so I’ve started animating in my boyfriend’s apartment, my parent’s house, hotel rooms, just about anywhere I can find space and time. I am very blessed to be have many talented friends and family who lend their time and voices.

All the production is self-funded right now, though I’m hoping to start generating some revenue from DVD sales and YouTube ads so that I can start breaking even. I have a full time job producing videos at the University of Chicago, which pays the bills and gives me health insurance. For now I’ve been able to find time to have a job, produce this series and still have a social life, but I’d love to have more time to devote to the series.

Tubefilter: You mentioned your show is popular among LEGO fanatics, can you tell me a little more about that?

DP: I have been a LEGO maniac as long as I can remember. There is a whole community of adult LEGO fans (most of whom have even more bricks than I do) out there on the internet. There are countless sites where we come together and share pictures of our creations and give each other feedback. There are even several sub-communities specifically devoted to stop-animated LEGO movies. Long before I concocted the series I was posting creations and animations to these sites and built a strong network of friends and fans. For the past few years I’ve been attending Brickworld, a LEGO fan convention here in Chicago, where I get to meet everyone in person and really show off my creations, not to mention getting to see lot of awesome things other people have made.

The LEGO fan community has been incrediblly supportive and definitely makes up the core of my current audience. One of my episodes got mentioned on the most prominent LEGO fan blog and that drove even more traffic. I’m really grateful to already have so many committed fans who comment on my work and ask when the next episode is coming out. It definitely keeps me motivated. Of course, I think there are still a lot of people out there who would really enjoy the show and have never heard about it and I’m always trying to come up with new ways to reach those people.

Tubefitler: How long does it take to do the LEGO stop-motion animation? Can you walk me a little through the technical aspects of producing an episode? 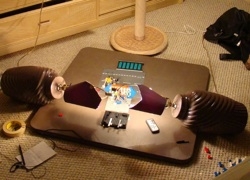 DP: Since I get this question so frequently I have started keeping track of my time more precisely. For the first chapter, which is about 24 minutes, I put in about 102 hours of animating time put into it. This number is both precise and misleading. It is only the time I spent animating: it does not include the time developing the script, recording voices, building the sets and characters, preparing to animate or editing the videos together. The initial concept for this series first came to me in Summer 2006, I started writing the script for this chapter in Spring 2007. Over the next couple years I revised it several times and started recording voices. I started filming in February 2009 and finished production in March 2010.

I usually come up with all my ideas for plots while riding my bike, washing dishes, and other every-day activities. Then I work up a script and sent it off to my friends to get feedback and make revisions accordingly. Once it’s in a good place I may sit on it for up to a year before I’m ready to move on to the next phase. Then I record all the lines with my talented friends. We usually do a lot small revisions on the fly as we record and there is always a certain amount of improvisation. I’ve rewritten entire scenes because an actor thought something was out of character. Then I edit together all the voices in the order of the script. While all these parts of the process are going on I am also working on building sets and characters, which is a process that can take a few minutes or several months depending on the size and complexity of the creation. Soccersaurus went through a number of revisions before I was happy with it. Using the edited audio, I put together an animatic, which is just a rough storyboard set to audio. Once I’ve figured out what shots I’m going to need and how long they are going to be I will break each one down further and figure out how many frames (pictures) will be needed for each major movement. I write this down in a notebook and then use that as my guide when I’m animating. Now at this stage I’m finally ready to animate, and because I put so much work in before hand, the task of animating is usually pretty straightforward. Then I’ll edit the clips together, add graphics, sound effects and music and it’s ready to go.

Tubefilter: You are working on producing a DVD of the first chapter. How is that going? If it’s available, where can people get it?

DP: I’ve been hard at work on the DVD this past week and it’s coming together nicely. At this point the only thing holding it up is a “deleted scene” I need to finish animating. I hope to have the DVD finalize in the next week or two and then I will be distributing it using CreateSpace. Hopefully it will be available in late April or Early May. I will have all the information up on the series website as soon as it’s ready.

Tubefilter: Anything else you want to plug or share you think our readers will find interesting?

DP: If (readers) are interested in other animations I’ve done they can check out my personal website.