[Ed. Note: Guest article from Jeremy Redleaf, the creator of the Streamy-nominated comedy web series Odd Jobs, and the site Odd Job Nation. He is also the founder of Brackets Creative, an award-winning NYC-based Production Company. Recent projects include The Gold Aurora Award recipient “The Nothingness Company” for the Peers Partnership, a three-documentary deal with digital distribution company Cinelan, PalinJuno, and the feature film Come Get Me. Follow him on Twitter: @theleafisred] 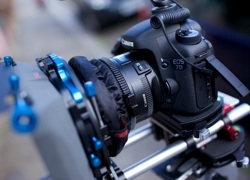 Like many first-time web series creators, when I set out to shoot the Odd Jobs pilot I called up a bunch of friends, withdrew a thousand dollars from my bank account, and went out into the world just hoping to catch something on tape. It was a blast… and even if we didn’t always have well-crafted lighting and sound, I just had hope that the content would shine through.

… and I guess it did. We threw the first episode up at Odd Job Nation and immediately started raking in national press. Before I knew it, I was hearing from major agencies, showrunners, and even some networks. The right people were watching, but they all wanted to see more. I figured this meant Uncle Dave probably shouldn’t keep holding the camera, so I brought on Ed Riew of Urban Sled who provided a professional crew and introduced me to the glorious Canon 7D.

Ladies and gentleman, I’m happy to report that there is officially no longer an excuse for poor technical quality on a web series.

Retailing at approximately $1600 plus lenses (and renting for about $100 for the weekend in NYC), this SLR-Camera is making a lot of noise in traditional and new media production circles: SNL’s new opening sequence, Robert Rodriguez, and high profile web shows like Continuum TV, Vuguru’s The Booth, and Anthony Zuiker’s Level 26 are all taking it out for a spin.

The 7D is a game-changer, but it’s not perfect. Here’s everything you need to know to shoot successfully:

With 1080p HD quality, full raster, and the ability to use inexpensive prime lenses for that film-like shallow depth-of-field, the 7D is the absolute bang for your buck. Not only is it incredibly affordable on the front-end, the camera also performs phenomenally well in low-light situations which opens up the possibility of using some practicals and renting a smaller lighting equipment package.

Even more impressive is its dynamic range. On a recent Odd Jobs shoot, we were losing light so quickly that everyone assumed we’d have to reshoot. That is, until we popped it into Color and realized we could magically bring it back. Take a look:

And for the guerrilla filmmaker in all of you, the 7D makes stealing shots in public areas an easier proposition. Not that I, uh, recommend lawlessness, but if you hypothetically wanted to, the 7D’s less-imposing still-camera frame could allow you to jump on the subway or into a museum with a greater chance of escaping suspicion. 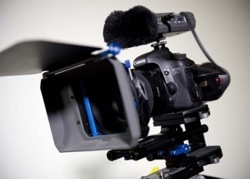 The biggest negative is that the 7D doesn’t yet have a sensible solution for recording sound directly into camera. This means whoever’s running sound will have to record it into a small digital recorder and then you’ll sync it all up in post. Fear not though, it’s often helpful to not have your sound guy tethered to the camera and there are now programs like Pluralize ($150) that will do the heavy lifting of synchronization.

If you’re dead-set on shooting quick whip pans around a room Office-style, this may not be the camera for you. It has a rolling shutter which will produces jello-y vertical lines on quick movements. It’s also more sensitive than usual to tight patterns, so leave your plaids at home. (Note: The Red One and Sony EX-1 have these same problems)

The last ‘con’ is really just for the nerds– it shouldn’t really matter for your web series, but the Canon 7D doesn’t record in a raw format– it uses H.264 compression. But it’s as far as compressed codecs go, it’s one of the best and should provide more than enough information to make your series look spectacular.

Now that nearly every web show can find its way on to a tv set, we have to compete at a higher level if we’re going attract the viewers (and advertisers) we deserve. If you don’t have the coin to shoot on the Red like The Bannen Way, adding the Canon 7D to your team is your best shot at making a splash.