eScape the Series Trailer 1 from Runic Films on Vimeo. 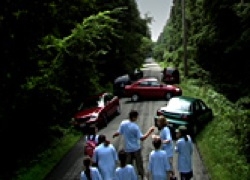 It is every kid’s dream to have the run of things without those pesky adults interfering but what would happen if a group of summer campers woke up to actually find this a reality? This is the premise of the upcoming sci-fi kids adventure series eScape.

But wait, where does the sci-fi come in? Well, on top of all the adults disappearing, the kids also find that they have super powers and unbeknownst to them, they are actually trapped inside of a video game.

It’s no coincidence that the series would appeal to kids: creator Mike Feurstein began the concept of the series as an independent summer video course to give young students experience both in front of the camera and behind the scenes. The show shoots in Albany, N.Y. and stars local actors and school children. The students also work behind the scenes to help produce the series.

Premiering this summer, the show is a joint project between MovieQuest Productions and Runic Films and promises important lessons along with non-stop action, which adults can enjoy as well as kids. “Young and older viewers alike connect with its characters’ struggles to make the right life choices in the face of adventure, danger and unimaginable odds”, says Feurstein.