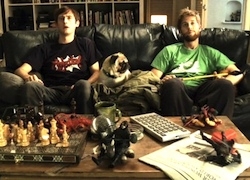 Twenty-five year old Jarrett Larson moved to Los Angeles to make it as a superhero-monkey cartoonist. For the moment, things are not going well. His Halo-intolerant girlfriend / sugar momma just dumped him, and he’s moved into an ominous, illegal commercial rental in a sketchy part of town with just a few boxes and his pug, Cheese. He still has his friends, of course (particularly his fellow Halo-playing teammates), and his sunny and bounding disposition is essentially intact.

But Jarrett’s voice-over tell us he has dreams of putting his cartoon character, Space Monkey, on the pajama pants of every kid in America by the age of 27. So, for the time being, he’s facing a mountain of feces (which may have been fired from his Space Monkey’s ‘feces canon’).

And so begins Singledom, an online series from the ‘stealth’ web TV outlet of Fox Television Studios, 15 Gigs. Singledom embraces a few flourishes of the experimental that you’d expect from a relatively new player in the digital content game. Unfortunately, it starts to feel ordinary once you realize it’s the confused twentysomething progeny of Sex and the City and Superbad.

It’s not just that Jarrett and his core group of friends (two guys and a girl) banter at a table for four (albeit at a ‘rotisserie chicken-n-donuts’ joint vs. a SOHO brasserie), or that he and his buddies frequently engage in sex-related talk, or that the action plays out on top of a soundtrack all too reminiscent of Friends. It’s more that the creators have opted to take the well-worn path of introspective, post-collegiate man/woman/child making his/her way in a metropolis steaming with possibilities and disappointments.

Plus, it’s all accompanied by a fluffy voice-over. Don’t get me wrong, voice-overs can make a lot of sense for web video. They provide an opportunity to bring viewers up to speed within a limited time frame. But in Singledom, the added explanations dilutes the edgier elements of the series. The show loses some of its bite. 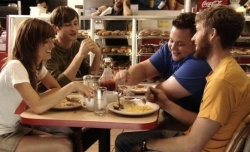 Singledom is created by Jonathan London, an accomplished young film and commercial director and host of Geekscape. I suspect Fox TV must have had some say in the web series’ production, but for the sake of argument, let’s just say that London had total creative control. Who then, is the target audience? Gamers? No onscreen (game) play to speak of and the storyline doesn’t center around what happens when online addicts navigate real world relationships. Tweens? It’s a little too sexual. Folks in their twenties? Eh. It’s a little too immature. The more one tries to parse the question, the more it seems to be about portfolio-building for 15 Gigs and the director, and not much else.

The final episode does proffer a couple shining moments. The best of which is when, after an exotically sexy young woman falls through the floor of Jarrett’s new place, Jarrett’s stocky friend commences a romantic daydream. In the fantasy, he dons a curlicued mustache and old-fashioned nightie while she wears a teddy. Its timing is so out of left-field, particularly because of the straight material immediately before it, that it makes for a high-scoring moment.

The bantering amongst the friends and one of Jarrett’s now-former co-workers is cute and sometimes mildly amusing, but it all feels something we’ve already seen. At only three episodes, there is of course room for growth. For now, though, Singledom fills an old mold instead of breaking one.