[Ed. Note: This is a guest article from Break Media’s CEO Keith Richman who spent a little time hunting down some underdogs—the Best Web Videos of 2009 that didn’t break through. Their flagship site Break.com is known for its male-friendly and click-worthy comedy vids, so his list leans a little in that direction. Most are virals, or really not-so-virals, with a few foreign commercials in there, though it’s nice to see a web series make his list.] 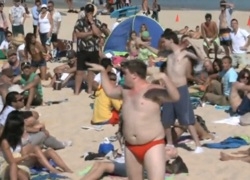 The end of the year is a natural time to take stock of the most popular online videos that captivated us all year long. But just because a video is funny, creative, and/or clever doesn’t mean it will automatically become a web sensation. Web video content creators (everyone from college kids in their dorm room to marketers creating branded videos) are learning the hard way that there is a lot that goes into creating a viral video, beyond just putting something good out and hoping for distribution via organic word of mouth. In fact, the surprise viral online hit is increasingly becoming an anomaly, and without a strategic plan in place, even the coolest, and most novel videos online will have difficulty achieving blockbuster numbers.

To illustrate this, I’ve compiled a list of a few of the top videos posted online this year that I think could have been much bigger hits. Why didn’t these videos go viral? It’s simple: no distribution. If you’re a web video content creator, producer, director, or publisher, you need to consider distribution and marketing for your video as the essential way to gain visibility online. So what does that mean? Well, first of all it’s important to make sure your video is placed on the destination site(s) that will reach your target audience. Decide if it’s best to post it first on a niche site where you know your video will be well-received, or if it’s better to take a broader distribution approach (usually it’s the former). Know the correct channels that will target an aggregated audience of loyal followers, especially if your video is the first installment in what will be a recurring web series.

And yes, social media is part of the equation. Determine which social media platforms you are going to use to plug your video. Twitter and Facebook are obvious but effective choices. Marketing will be a key component to making sure your video gains traction online.

Here is a collection of original videos, branded videos, and user-generated videos from across the Web that make my list of “the best videos of 2009 that nobody ever saw”: