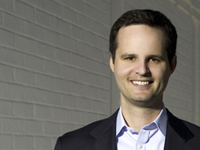 Web series fans, take note. The International Academy of Web Television, the independent, non-profit organization that serves as the voting body for the Streamy Awards, officially announced its Board of Directors today along with its first Chairman, Michael Wayne, co-founder and CEO of DECA (Digital Entertainment Corporation of America).

“Just as the Academies of Motion Picture and Television Arts and Sciences had humble beginnings, so do we,” said Wayne in the IAWTV press release today. “While our industry may be in its early stages, it is growing at an exponential rate … 2010 promises to be a phenomenal year for the International Academy of Web Television with the 2nd Annual Streamy Awards and the continued expansion of our membership.” Before DECA, Wayne served as the Vice President of Strategic Alliances for Sony Pictures Digital and Sony Pictures Television.

The board is an impressive collection of talent from the web television world, bringing together their experience in areas such as content creation, finance and distribution. First up is Blip.tv co-founder Dina Kaplan, who will serve as the board’s Vice Chair. Besides the experience with distribution through Blip.tv that Kaplan brings to the table, she also brings a journalistic perspective having won several awards from the Society of Professional Journalists. Mo Koyfman, Principal at Spark Capital, a venture capital firm whose notable Web TV investments include Next New Networks, EQAL, Boxee, and Veoh, will also sit on the board. Before Spark Capital, Koyfman was the COO of Connected Ventures, parent company of popular web video sites Vimeo and CollegeHumor.com.

Also joining the board is John McCarus, someone who has intricate knowledge of branded entertainment as VP Director of Brand Content at DIGITAS, whose clients have included high profile companies like Disney, General Motors and KRAFT.

Then there’s content-creation and who better to sit on the board than The Guild creator-star Felicia Day who has created one of the most successful web series to date. George Ruiz, Head of New Media at talent agency ICM, will serve as the board’s secretary. The board will also include Tubefilter co-founders Brady Brim-DeForest, Marc Hustvedt, Drew Baldwin, Josh Cohen and Jamison Tilsner. My two cents: Many on the board have been acting in an unofficial capacity for some time, so members should already have a good feel for where the Academy will go during the board’s initial one-year term.