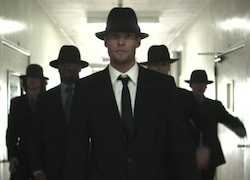 The problem with dance movies isn’t the dancing. Everyone enjoys watching unrealistically attractive teen and twentysomethings manipulate and contort their bodies in unbelievable ways to hip-hop driven beats. And I mean everyone. I’m no anthropologist, but I’d say humans have a universal, positive association with cutting a rug. Dance, after all, is the world’s oldest art form, and after thousands of years of being an integral part of our culture, it’s fun to watch people do it well. YouTube proves my point.

The problem with dance movies is the storyline. The exposition generally sucks. It’s difficult to pay attention to or care about plot developments so hackneyed they’re fodder for a Wayans flick. Watching outsiders or underdogs endure life-changing experiences—the death of a close family member, the attainment of a love interest, a montage—is unbearable when all we want to do is see them step up, bring it on, or stomp the yard.

The solution to dance movies is Jon M. Chu‘s The Legion of Extraordinary Dancers (aka The LXD). The web series from Agility Studios and the director of Step Up 2: The Streets borrows a few moves from sci-fi television and applies it to the dance genre. The storyline follows “heroes and villains with amazing powers of dance, that band together in rival factions, with an epic back-story and mythology woven around how the various dance styles in the hip-hop world came to be.”

Sounds awesome, right? Paramount Digital Entertainment thinks so, too. The development and distribution subsidiary of Paramount Pictures just closed a deal with Chu and Agility to distribute The LXD.

Details on the deal are sparse. The 10-week, Volume One of LXD will debut on “select online video destinations” beginning in “early 2010.” We’re also told that Puma is still involved with the series and more sponsorship info will be “coming soon.”

The LXD is Paramount Digital Entertianment’s latest foray into the original web series space. In August, they teamed up with MySpace and Mountain Dew for the supernatural thriller, Circle of 8. The distribution deal is the second we’ve announced this week involving Agility Studios. They’re having a great end of November.