'Downsized' and the Moody Characters of Recession 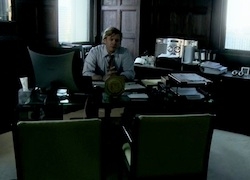 Web television aficionados will probably find Downsized to be something of an enigma through the first few episodes, and with good reason. As is the case with other mediums, the most successful of web series tend deal in the currency of escapism, whether they’re meme-ripe comedies or eye-dazzling action/adventures. Downsized, on the other hand, has no interest in taking us away from the real world or its concerns. It’s instead best described as a series of dramatic vignettes, following three sets of characters throug lean times while providing a clear message: everybody feels the recession, but they do so in their own, personal way.

The characters are familiar, not because of their conformity to archetypes or because we’ve seen them before, but rather because they’re so close to real. There’s Beth (writer and director Daryn Strauss), the smart, career woman who’s brusquely let go from her company; Lowell (Duncan Murdoch), the sharkish “efficiency expert” who deals in corporate cliches like “being a team player”; Astrid (Shannon Conley), the smarmy-yet-sympathetic beauty pageant coach who squeezes money out of gullible clients to pay her credit card bills; and Leyla (Esra Gaffin), the immigrant cleaning lady whose tearful workplace breakdown makes her less invisible than her broken English ever could. These are not the type of people we visit YouTube to watch—they’re the people we pass on the street every day.

One of the most intriguing aspects of Downsized are the notes that accompany each episode. In these notes, Strauss includes a bit of information about the inspiration and process behind each installment, lending further credence to the show’s “inspired-by-real-stories” feel. Beyond its sound, believable writing, Downsized features an adept ensemble cast with no real weaknesses, made even more impressive by the fact that the actors are able to command the viewer’s attention and sympathy within the show’s quick, disjointed storytelling. Also contributing to the show’s concise nature are some of the most thoughtful visual compositions you’ll find in any web series, the style of which perhaps most defines Downsized’s quietly moody atmosphere.

It remains to be seen how Downsized will establish itself; as of this writing, the three sets of characters share no apparent unifying plotline, but it’s not difficult to imagine a Crash-style narrative in which the show’s separate threads begin weaving themselves together. One can already spot the beginnings of this concept at work – Episode 3 begins with Astrid, the beauty pageant coach, arguing on the telephone with a briefly-shown credit card collector. The next installment focuses on the credit card collector himself, who is identified to be Andy (Conan McCarty), a failed motivational speaker just barely managing to hold onto his job at the company where Beth used to work. If these isolated stories are the dots, the overarching narrative is already finding subtle ways of connecting them.

It’s hard to say that Downsized is entertaining, because, in all honesty, it’s not, nor does it really attempt to be. Instead, the show examines some very serious, very difficult subjects that many people would probably rather put out of their minds, and in doing so delves into some uncomfortable moments and situations. In its rigorous attachment to the real world, Downsized has succeeded in giving relevant drama a home on the web.