'The Burg' Is Cool Again, Hipsters Back, Yupsters Out 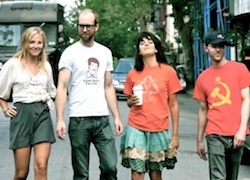 The recession really knocked the pants off this country in the past two years, but if there’s any shine on the economic turd it’s that at least Williamsburg is cool again. Sure the trust fund kids took a hit when the market tanked, but real estate got cheap again and the Yupsters thinned out. So what better time to bring back Brooklyn hipster comedy The Burg?

The indie web series from Brooklyn-based Dinosaur Diorama, the same team behind All’s Faire and Vuguru’s The All-For-Nots, is back with its first full-length episode since 2007. The 20-minute episode, “Change” (above) is also the show’s longest, starting off with a catchup of what happened since Xander’s season-ending autobiomentary .

Xander (Matt Yaeger) fills us in on his posse—Courtney (Kelli Giddish)  is moving out of The Burg, heading to LA for a TV show gig and Ryan (Jeff Skowron) is losing his grip on sanity. Jed (Bob McClure) and Xander realize they live in “the coolest neighborhood of the coolest borough in the coolest city in the world,” and decide to make it their mission to set some new hipster trends—pogo sticks, Kitten Shirts, skorts. Oh, and Xander has a kid?  Spring (Lindsay Broad) tries to keep Courtney from selling out her ideals for a beach house, turning to hipster savior Obama for some direction.

“We were nominated for a Streamy…which are like the Emmy’s but it’s exclusively for people who are doing it on the internet.”

“You lost to Battlestar Galactica” 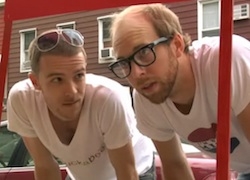 As always, a handful of under the radar local Burg bands are tapped for the episode, this time it’s Future in Plastics, Bishop Allen and Project Jenny, Project Jan.

Somewhat melancholy is that the fate of more regular eps of The Burg is still up in the air. “Art imitates reality,” co-creator Thom Woodley tells us. “We want to shoot some more episodes in January, again with Peter Sollett, although it’s tricky because Kelli (Courtney) and Lindsey (Spring) are both starring in TV shows these days.” Giddish stars in FOX’s upcoming drama Past Life.

Luckily, the end of the episode has a nice treaser for the new season of their Streamy-nominated RenFaire spoof All’s Faire which kicks off November 17. Woodley tells us they have 15 new episodes of the barb-filled comedy coming out that are, “extremely funny and expanded in scope from what we put up last year.”

In the meantime, there’s also Yaeger and Skowron’s own Dinosaur Diorama series Greg & Donny that’s worth a look (below).