'I Kissed A Vampire': Even Campier Than 'High School Musical'? 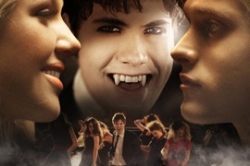 What do you get when you take High School Musical‘s Lucas Grabeel and One Tree Hill’s Drew Seely, give them some fangs, and tell them to sing and dance? You get an online musical, I Kissed a Vampire,  that would have Joss Whedon rolling in his grave (and that’s not even possble!)…and you might smash your computer in the process.

For instance, you might have the type of frustration I did just trying to watch the episodes. Only available on iTunes, you first have to be willing to pony up the $1.99 an episode, then you need to make sure that your iTunes is running at it’s most current version, and finally, you have to have the latest version of Safari running to order from the online store. Oh and of course, the latest version of Safari only runs on Mac versions 4.0.3 for Tiger or higher, so make sure that is taken care of as well.

Granted, being a Mac user, I don’t know if PC users will have such a hard time and I personally have an odd fear of updating software because of a kernel error that destroyed my world that I got when trying to do a simple software update about 6 months ago. But I’m fairly computer savvy plus I love vampires AND musicals so you can imagine my excitement at a vampire musical! Long story short: if the hoops I had to jump through were coming to a point where even I was tempted to give up and not watch, that is saying something.

That’s not to say that I don’t think I Kissed a Vampire isn’t going to do well in a particular market. The pull of a High School Musical connection alone will guarantee a fair amount of downloads. Not to mention the Twilight quotient, although the campiness of the material is almost on the verge of making fun of the popular series (for an example of parody done right, check out Take180’s I <3 Vampires. And having grown up performing in musicals, I can admire the amount of time and energy that went into the production. I just don’t know if it was worth the several hour struggle with my software updater. Though you know, kids know a lot more about technology these days. I feel so old all of a sudden…

Now, if you are in New York, you can avoid the computer issue all together and check out the premiere live at Landmark Sunshine Theatre tonight at 6 PM EST. Grabeel and Seely will be in attendance with co-star Adrian Slade. Tickets are given out on a first-come, first-serve basis so get there early if you do plan on going.