Shira Lazar Signs On With CBSNews.com, ‘The Tomorrow Show’ 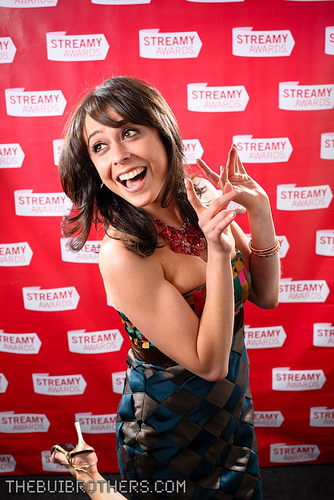 It’s hard not to notice Shira Lazar these days on the internet. She’s been the go-to choice for covering tech events, social media pow-wows and yes, even the Streamy Awards. Her Qik-enabled iPhone is known to capture those semi-candid kind of interviews that fall somewhere between tech journalism and lifecasting.

And as a web series host, she’s been brought on for a number of hosting roles— taking over for Leah D’Emilio on This Week in YouTube and recurring stints on TechStyle and This Week in Startups. Now the Montreal native may have found a more stable online home, singing on with CBSNews.com working as Los Angeles correspondent for Mo Rocca’s new web series, The Tomorrow Show, and with her own regular blog on the site.

On the Scene with Shira is name of her new CBSNews blog, and though this means more writing than her usual 140 characters, Lazar said video will remain a central part of her coverage. She still will be popping out that Flip camera she tells us, adding an extra level of access to her pieces. He first post which went up yesterday was complete with a off guard Katie Couric, now a CBS colleague to Lazar, meeting her for the first time. (See below)

In it we see a humble Lazar introducing herself to what must be a role model for the young talent, and there’s something about the unedited rapport that makes you believe that Lazar isn’t in this for the ego boost of a larger stage. “Spend less time being interesting, and more time being interested in people and the world,” she wrote in her opening post.

As a correspondent on Rocca’s Tomorrow Show, it means the typical assignment pieces that tie in to that week’s episodes. The series itself is off to a decent start and now three episodes in, it’s comedically covered some forward-looking current event topics like The Future of Paper and The Future of Candy. Lazar will debut on the series next week. We caught up with Lazar to find out more about the new gig and if she plans to shake up the culture at CBS.

Tubefilter: How did you get hooked up with CBSNews and Mo Rocca? Did they reach out to you?

Lazar: I met with the head of talent in January and expressed my passion to bridge the gap between traditional and new media and be a voice for this community on a network. She introduced me to the team at CBSNews.com and we clicked. A lot of them come from CNET so they get us internet folk- the passion, non-stop brainstorming and thinking outside the box. After a few months of “keeping in touch”, they decided to move forward and have me launch my own blog/vlog and contribute to their web series with Mo Rocca, The Tomorrow Show.

Tubefilter: What’s the focus of your CBSNews.com blog? How often will you update?

Lazar: My blog is called “On The Scene”, where I track the best in social trends and pop culture. It’s in many ways a convergence of entertainment and technology. The blog will be updated consistently throughout the week with written pieces, as well as video blogs. The videos may consist of everything from a Skype video interview with a notable/newsworthy personality to a behind-the-scenes look at a VIP event taken with my Flipcam. The whole point is to be “on the scene” and use social media tools to find the source and interview the person involved in that story. I want to give people a glimpse at the people and things that are inspiring, fun, shaping culture and have us all buzzing.

I’ve worked on so many different projects over the years, which each tailor to a different passion of mine—tech, entertainment, travel and social good. This is one place where I can hopefully bring all those passions and interests together with content that informs, entertains and creates a conversation.

Tubefilter: You have a strong background in social media and technology coverage, what are you hoping to bring to CBSNews? What’s missing right now that you hope to add?

Lazar: First off, it’s an honor to be given the opportunity to offer a fresh perspective to a trusted brand like CBS News. I’ve been using new/social media tools personally and professionally for years. It’s an extension of who I am, so it’s exciting and a great opportunity to bring the energy of this community and generation to an outlet that many might say an “older generation” has grown up with. I hope to be a voice that bridges that gap.

Tubefilter: Will this be your primary work for now? Are you still going to be working on other series?

Lazar: I’ll still be hosting Mahalo’s This Week In YouTube and I’m an Ambassador for a new site launching early October geekchicdaily.com. You can always follow everything I’m doing on my twitter @shiralazar.

Tubefilter: How much video content will you be doing?

Lazar: Video has always been the foundation to all my work, so I’m going to try to bring a video component to as many posts as possible.