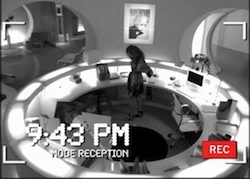 We have all heard the saying “when the cat is away, the mice will play.” In this particular case, it’s the Executive Assistant and the Receptionist at a high-end fashion magazine that are the ones doing the playing.

Mode After Hours is a spin-off webseries that follows two characters from the popular ABC dramedy series Ugly Betty and their office antics when the rest of the staff has gone home. Marc St. James (Michael Urie) and Amanda Tanen (Becki Newton) are “besties forever” and their frantic and odd devotion to each other is topped only by their disturbing obsession with themselves. From Amanda’s “Me Pile” (packages delivered to the office that mysteriously end up “lost in the mail” only to be opened by Amanda when she’s feeling down) to Marc’s pretending he is babysitting a newborn just so he can stalk Jake Gyllenhaal, these two are dysfunctional with a capital func. But whether you identify with them in a “hey, I know people like that” way or just thank the heavens you aren’t anything like them, there is something about Amanda and Marc’s relationship that keeps you watching. Kind of like how you slow down to watch a car on fire on the side of the road.

According to a behind the scenes episode on ABC.com, “the idea for the webisodes came out of the idea that we always want to give our fans more content”, stated Lisa Schomas, Co-Producer for Ugly Betty. Beginning in September of ’08 for six episodes and then returning in March of ’09 for six more episodes, the show kept fans satisfied while waiting for season 3 of Ugly Betty to begin.

But it’s not totally necessary to have watched Ugly Betty to enjoy Mode After Hours. Besides some peripheral references to characters and plots in the show, the webisodes are pure Marc and Amanda and the actors playing them are more than adept at holding your attention. The inter-splicing of security camera footage with traditional third-person shooting establishes the concept simply and effectively.

An Amazon.com exclusive webisode surfaced (on YouTube) about a week ago and according to Michael Urie, a new set of Mode After Dark webisodes are scheduled to begin September 18th, presumably to lead into season 4 of Ugly Betty.