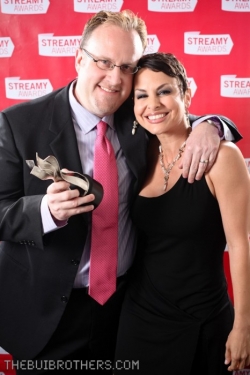 Today marks the two-year anniversary of the premiere of Streamy Award-winning series Pink and what better way to celebrate than to hear from series creator-director Blake Calhoun? I had the pleasure of interviewing Blake via e-mail to get the lowdown on his past and future projects, his directing process, and insight for those hoping to break into the New Media industry.

Tubefilter: You were one of the early creator-directors on the web series scene with Pink in ’07. What inspired you to go into the field?

Blake Calhoun: I had recently finished directing my third indie feature (an action/thriller called Killing Down) and was developing a new feature – a project in the vein of Boogie Nights about the early 1980s professional wrestling scene – and had hired Mike Maden to write it. We finished that script in spring 2007 and were playing the “finding money” game to make that film (btw, we’re still trying to get that project made). So in essence we were in between projects and I wanted to work on something new. I had made several short films over the years and really wasn’t interested in doing that again. Then one day I heard about this new online show called Prom Queen… and inspiration struck.

I had worked with Natalie Raitano and Sheree Wilson on my previous feature film and they both had nice TV followings from their work on V.I.P. and Walker, Texas Ranger respectively. So I thought we’d create this new “Web TV” show around them and hope to lure some of their fan base to it. One of my favorite filmmaking books is Robert Rodriquez’s Rebel Without a Crew and I have always remembered the idea of making low budget films around things you have access to whether it be locations, props, people – whatever. So that’s what I did with Pink. We created this story around the actors I knew and then used my office and house as the main locations (for Season 1), and then used all my company’s infrastructure (ie. production and post gear) to produce the series. So Mike (the co-creator) and I developed the show in May, wrote it in June, shot it in July, edited in August and premiered it on MySpace and YouTube the Tuesday after Labor Day in 2007. By early October we got featured on the front page of Revver (big thank you to them), and then YouTube’s front page (huge thanks to them too). By Halloween things really started rolling and we hit the one-million, then two-million mark and eventually we got a call from Barrett Garese at UTA (with a little help from a fan of the show, Tim Street). Funny thing too about signing with UTA, we’re now friends with the guys in Big Fantastic who created Prom Queen – our original inspiration – since they are also repped there.

And that’s one of the best things about new media and web video – and btw, I wanted to say this during my Streamy winning speech but forgot—that two guys from Dallas, Texas with no real Hollywood connectionscan create a show, build an audience, get signed by an agent, then sell that show (to Jordan Levin and his company Generate) and get to produce more episodes – all within about an 8 month window. Just a few years ago the main way to do this was through a hit indie film (and it was a long shot), and even then you had to get accepted into festivals and/or get distribution. Now, those barriers have been broken down -at least for the most part. Which is a very cool thing.

Tubefilter: How is directing in New Media different than feature film directing (which you also have a background in)?

Calhoun: I always jokingly (but half seriously) say the main difference between my online shows and my feature films is that people have actually seen my online shows. Otherwise, I approach them very similarly. One of the main things I wanted to do with Pink was shoot it in a very cinematic way. I wanted to bring our feature film craftsmanship and storytelling skills to the web, and I think we did that. Most of the shows online in 2007 were very “home made” looking. We wanted to bring (professional) production value to the computer screen much like I think the Big Fantastic guys did with Prom Queen. We also structured the story in a very serialized, but non-linear fashion – like some movies and of course comic books. We call Pink a live-action graphic novel. It’s a hybrid between a film and a TV show – it’s neither, but it’s both. I guess it’s “web television” – or whatever they’re calling it these days. In the end I’m just trying to tell a good story with interesting characters that hopefully the audience cares about. I also think besides having a good script, casting is the most important thing a director does. I don’t care if it’s on the web or the big screen – that part is the same. And with the recent ability to watch HD video online with broadband connections (when we first launched Pink we shot in HD, but seeing it online like that was only a dream), I even shoot them pretty much the same. Would I do an epic western shot 2.35:1 for the web? Probably not. But otherwise, I see directing as directing.

Tubefilter: 88 Hits began as a feature film, what was the process of transforming the project into a web series?

Calhoun: Turning 88 Hits into a web series was primarily done because I had never found distribution for the original movie called Hit, and with the recent success of Pink and some of my other projects I wanted to try and find an audience for it. It’s completely different than Pink too. And I like that. One thing I’ve learned in Hollywood is everyone likes to pigeonhole you as a “action director” or a “comedy director”, etc. Actors of course probably get it worse than directors do. But I started out doing mainly comedy. It just so happens that I’ve found some success on the drama/action/thriller side of things. But I like to work in a variety of genres.

Of course making 88 Hits into a web series does go against everything you hear from people (including myself) to not “turn your movie” into a web series. The difference here was that this movie was really structured as a mock-doc in titled sections – almost individual sketches that all connected to tell the story. The entire movie was improvised in the style of This Is Spinal Tap with the very funny and talented guys in Four Day Weekend, who all trained at Second City in Chicago. So it just made sense to break the “sections” apart into episodes and release it online. We also created some new content and even a spin-off show called The DIY’s Guys. This spin-off is really just a promotional vehicle for 88 Hits, but it actually feels like it’s own show.

I pitched 88 Hits to David Samuels at Koldcast TV and he was interested, so we partnered with them and premiered our first season earlier this year and right now season two is rolling out through the end of October (there are 21 total episodes). Working with Koldcast has been great too – they are very filmmaker friendly – and I like what they’re trying to do with original programming. At the end of the run on Koldcast we’ll have a DVD with both seasons available for purchase. In addition to Koldcast the show can be seen on YouTube, Facebook and Blip. We’re also now developing the show as a traditional TV pilot pitch.

Check back in tomorrow for the second half of the interview where Blake talks about his future projects (including the upcoming WB.com series Exposed) and give tips and tricks for future web series creators.

Top photo by The Bui Borthers.