Dave and Ethan Charm Pants Off In 'Double Date Us' 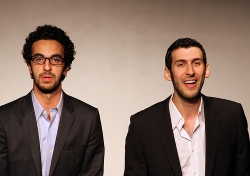 Finding love is never easy, and those who subject themselves to love voyeurism often pay the price (Jon dumps Kate, The Bachelor sheds his bride, and Michael Cera breaks it off with Charlene Yi.) That doesn’t mean watching anyone search for love isn’t incredibly entertaining, and comedians David Ahdoot and Ethan Fixell are astutely aware of that fact.

The pair created the show Double Date Us with the simple premise they will treat any two nice ladies to go on a date with them with only one catch, let them film it. The result is a delightful treat of two friends on the undying quest for love who typically end up enjoying their bromance more than their dates.

I caught up with co-creator Dave Ahdoot about the good, the bad, and the ugly of the voyeuristic romance, and how the whole crazy notion got started.

“One night Ethan was given VIP tickets to a comedy show (he works for Comedy Central), and he decided to take me.  They took us to the front of the line, and gave us the best table.  It was true VIP treatment.  I was actually impressed with the pull he had, which led to me asking him, why he took ME and not some wonderful girl he liked,” muses Dave about his close bond with Ethan (ed note: the pair have known each other since they were twelve.)

“We ended up having fun on the rest of our “man date” and thought we’d have a good time if we went on dates together (double dates).  So we made an ad on craigslist, and linked it to our first YouTube video.  We started getting a bunch of e-mail responses, and our friends loved the first video, so we thought we’d make a series out of it to track our quest for love.” 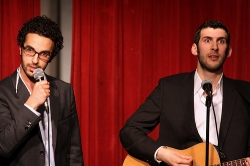 Since that notorious first video (above), Dave and Ethan have not been short on attention. They’ve received over 2000 emails from willing women, have gone on over 200 dates, and are currently doing a live stage performance at a college near you where they spout out what they’ve learned from their dates through comic relief and song.

When asked if this was more than just a ploy to find great chicks, Dave assured me, “these girls are not actors, but when they’re on a date with a camera following them around, they do feel the pressure to perform.”

These web romeos have different production tasks to worry about more than the average web producer. Major costs mainly amount from throwing an entertaining date, and some girls show up, and won’t agree to be filmed. Undaunted, Dave says, “we’d love to make a lot more of these.”