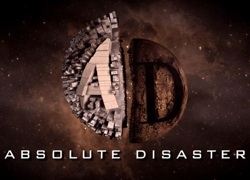 For web series creator Brett Register and his newly formed creative team Absolute Disaster, the web is their playground. A mix of actors, writers and talented cinematographer, the 5-person outfit has been busy this summer, conjuring up one bizarre comedy after another. It’s a formidable crew (no pun intended) that includes Register, The Crew’s Craig Frank, Tim Riese as DP, and Prom Queen stars Katy Stoll and Haley Mancini.

Freed from the self-inflicted pressures of having to launch the pitch-perfect PR strategy, or secure a brand name sponsorship, the Absolute Disaster crew are just having fun.

“We are really trying to play with experimenting on every level—length, releasing schedule, format,” said Register. The first series, an enigmatic five-parter called Lost & Found, was the first of their creative experiments.

The short web series are seeped with the farcical but understated brand of humor that clicked with fans of his previous series, The Crew. The green screen sci-fi comedy found its share of fans, and there’s talks of a major online distributor picking it up for its second season. But the bigger the deal, the slower it seems to happen, even in the web television world, so Register enjoys the time to work on the new projects. “It’s nice to be in production while we wait for other deals to go through,” said Register. 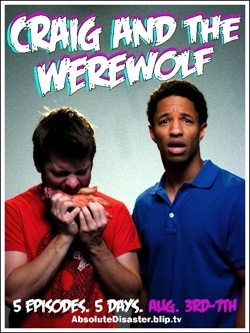 The latest project, Craig and the Werewolf, is a short five-episode appetizer of a story. Seemingly normal twentysomething roommates are getting along fine until one of them gets outed as a flesh-eating werewolf. It’s almost sketch comedy, and you could make the argument that it is, just broken up in to bite size morsels.

But Register says he doesn’t really like traditional sketch comedy, preferring to tell a story episodically with a defined arc. He throws out the phrase “incubating story lines,” which I take it to mean these micro-series could be developed further should the right interest be there. Trying short daily releases with this one, new episodes of Werewolf come out every day this week, ending on Friday.

I visited the set of Werewolf shoot, which doubles as Absolute Disaster’s base of operations and home to half the team. It’s a lean, skeletal crew, no more than necessary. Tim Riese, the team’s DP on camera with just one guy as assistant camera op and another on boom. Even Stoll jumped in to fill a gap on boom, showing how each one of them wears many hats behind the camera.

Register doesn’t hide the fact that he’s learning from another web series ensemble team, the Streamy-nominated four-man directing outfit Big Fantastic, which has helmed numerous studio-backed web projects like Prom Queen, Sorority Forever and Foreign Body. In fact, he worked directly for them on the recently-wrapped new season of Prom Queen, meeting Stoll and Mancini in the process.

A notable difference from his web mentors is Register’s choice to remain on both sides of the camera, often casting himself as the lead. This is something the Big Fantastic crew rarely if ever does. If you ask him, however, Register will tell you he thinks of himself as a director and creator first, and actor second. Stoll, Frank and Mancini, on the other hand, consider themselves actors first, but are active in writing some of the team’s upcoming projects.

There’s even a secret project, which Register has the team on lockdown from even whispering about. It’s another nod to his Big Fantastic mentors, who he notes, “create a mystery around everything they do.”

“We’re going to see where it takes us,” added Stoll. “We all trust each other and we’re excited to play.”