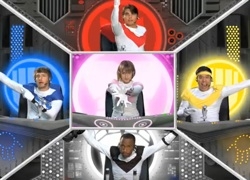 Ever wondered what the Mighty Morphin Power Rangers would look like if they kept at it after finishing high school?

They’d probably look something like the cast of MegaBot, the upcoming web series from 5432Films that takes the giant robot genre and gives it a rather not-safe-for-work spin on things. In classic Power Rangers tradition, the team is composed of five members, each with a different color: Red is Miles Fisher (best known for an eerily accurate Tom Cruise impression), Blue is Fran Kranz (Topher from Dollhouse), Pink is Heather Anne Campbell, Black is Giovanni Adams, and Yellow is none other than comedian Randall Park who you might know from Dr. Miracles.

MegaBot co-director Nathan Kitada summarized the creative impetus for us: “We grew up watching saturday morning cartoons, and we’re fascinated by those characters maturing along with us as we enter our mid-twenties. We wanted to see how the teenage character types in Voltron and Mighty Morphin’ Power Rangers would react if they still had to save the world, day after miserable day.”

Personally, I’m sold. So was Cherry Sky Films the production company behind MegaBot that made its reputation with indie hits like Finishing the Game and Better Luck Tomorrow. The show is slated to launch later this month for a five-episode run at roughly three to five minutes each. Subscribe to the 5432Films YouTube channel and make sure you don’t miss the premiere episode.