Love for Poster Boy, Artists in 'Friends We Love'

Friends We Love is a little documentary web show doing big things. The concept of the series is simple–highlight artists making their art. Nonetheless, the show has seriously caught on. Since debuting ten months ago Friends We Love has snagged an award from Current TV, attracted viewers from 109 countries and has independently produced 31 episodes of the web series. 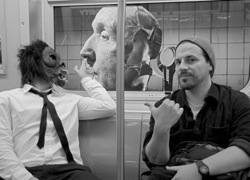 The series is the brain child of Moni Pineda (who’s also a successful DJ) and Mike Vargas (founder of New York multimedia group Nuyorktricity). It all started when the pair realized they had a long list of contacts who happened to be doing darned interesting things–a la DJing, cooking, rocking street art, and more.

A largely viewed video (posted below) even landed the subject in hot water. Poster Boy, a New York-based pop artist is known for his cut-ups of subway advertisements was arrested shortly after the video is released. Although, based on his current Flickr stream, the arrest hardly slowed down his creative process.

Fans of the show can get a daily dose of inspiring art from the creators and friends, on the show’s blog. Additionally, the team of two is working towards getting the show rolling on HD all the while continuing to sponsor awesome art functions in and around New York City, making Pineda and Vargas just as inspiring as their subjects.