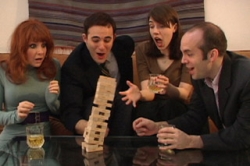 “I like things that are more ‘off’ I guess.” His words, not mine. Mitch Magee, that is; writer, director and creator of Sexual Intercourse American Style and Mister Glasses, two new(*) series on the Independent Comedy Network (ICN.tv). Truer words were never spoken. Okay, that’s a bit hyperbolic, but these comedies are definitely…different.

As he also says, Magee likes to create worlds, and that’s exactly what he’s done here and where to find the soul of both of these shows. While not out-and-out funny and sometimes even (seemingly) deliberately bland in the case of Mister Glasses, there is a strong voice being developed here. In essence, the real story is Magee himself.

Invoking the likes of Wes Anderson, The Ice Storm, and Three’s Company for his first effort at web television and directing in general, Sexual Intercourse American Style is surprisingly accomplished. At this point, with two episodes on the air and six more to come, it is the funnier of Magee’s two series, if perhaps a touch rougher. I don’t want to lay it on too thick, this show has a ways to go in terms of the humor and general quality, but the performances are interesting and the writing, though “off” is funny in its manner and style.

Since there are only two episodes, it’s worth just sitting down and watching this series that ‘explores’ the sexual mores, and ups and downs of two contemporary swinger couples. It will take about ten minutes and you’ll get a chuckle from both. Starring Will Hines, Eliza Skinner, Matthieu Cornillon and Julie Klausner, the performances are spot-on and mannered just perfectly. In fact, for their parts, I’m a bit amazed at how well everyone maintains the wink-wink-nudge-nudge tone – a testament to the actors as well as Magee’s direction. It’s also worth noting that Magee himself says that the series gets better as it goes along if only due the fact that he got better at filmmaking.

Mister Glasses is a touch more of an enigma in some ways. It’s not hilarious nor does it have punchlines quite the way Sexual Intercourse American Style has. Just the basic concept will leave you scratching your head, a web series about a Modern architect in a black and white 1950s-ish world. Not only that, but Mister Glasses (played by Magee) is a Modern architect in an era (according to each eps’ prologue) where Modernism has lost favor. Huh? But, in a weird way, it’s okay. And to me, an art school graduate, like Magee himself, it’s kind of great. It sets the tone for this odd, or “off” web series inspired by “the archetypes of 30s Hollywood”. I would say that if you liked the Coen Brothers, Man Who Wasn’t There, (with a touch of Hudsucker Proxy) this is right up your alley. Personally, I wasn’t a huge fan of the former, but I loved the latter, hence for this show, I’m on the fence. 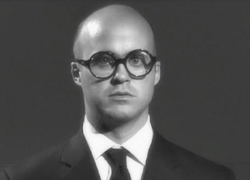 But my mantra remains the same, the star here is Mr. Magee. Okay, so that has double-meaning, didn’t mean it, but I’ll go with it: as I said, Magee plays the titular Mister Glasses and does a good job. Dry as day-old toast, almost robotic in his portrayal of this Phillip Johnson inspired character, what remains, as always with both shows, is that unwavering tone. Other players include Ellie Kemper, Ben Rodgers and Rob Lathan, his architectural firm colleagues. The stand-out being Ellie Kemper, Mister Glasses’s fast-talking His Girl Friday, who is worth watching in any of these five minute eps. Apparently she is only the in the first five eps, I’m assuming because of her new role on NBC’s The Office – Magee clearly has an eye for talent.

For a second series, there is a clear voice and a clear talent shining through. Magee knows what he wants and meat-and-potatoes programming ain’t it. This is more like acquired taste programming, and kudos to him for it. With six episodes completed and four showing, Magee wants to do two more to finish the series. Will I come back to watch them? Probably not. But will I come back to watch the new series that he’s cooking up? Absolutely.

So, my money’s on Sexual Intercourse American Style to get you to come back for more episodes, and Mister Glasses to get you to come back and see what world Magee will create in his next series. I do have a feeling that with both of these shows, the more you view them, the funnier they’ll become – much like many of the Coen brothers movies. But I have more of a feeling that the more Magee creates, the better and more interesting his work will become. It’s kind of wonderful in a way to watch an artist’s work at such an early stage, because it makes me excited for his potential and the new worlds he’ll be bringing to us hopefully sooner than later.

(* technically, the two series aren’t new to the web, having screened with Channel 101 NY at the New York Televison Festival last fall and later made it up on Funny or Die. They are new to ICN however.)