Atom's 'My Profile Story' Jumps to Life with Interactive Pilot 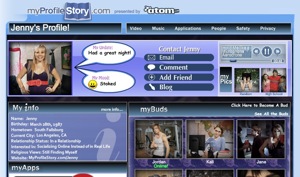 Brothers Benny and Rafi Fine, fresh off the second episode of Prop. 8: The Web Series, are keeping busy with today’s bow of My Profile Story, a satirical look at the drama that can come from changing your No. 1 friend on social networking sites.

Having drawn inspiration for MPS from “being appalled by but forced to use social networks,” the brothers said that “people who know us best know how long it took for us to embrace any of them as we truly feel they are ruining social interaction in the world and so we always kicked around the idea of making fun of it,” they said. “Plus understanding the web video world as well as we do, we were looking for a series that would be so perfect for the web world, and what better way to do that than with a social network parody?”

The brothers, also know for their copy-inspiring Lost parodies, don’t have any episodes planned beyond the pilot, but are optimistic that strong viewer response will help create a whole community around the series.

“(With) a rabid fan base, tons of views and audience demand, we hope to get the chance to build a community around this web series,” the brothers said.

The pilot (above), runs about six minutes and is available on Atom.com and on the show’s highly interactive microsite at www.MyProfileStory.com. The brothers were also able to bring Atom a partnership with Slide FunSpace on Facebook which will also be serving up the series.

“Should we get picked up, we have a lot in store for the interactive elements including Facebook applications involving the audience being included in story elements and we hope to get the opportunity on a larger scale to integrate sponsorship in an entirely new way since all social network sites already have real ads built into their pages, so we plan to have those ads ‘come to life,’ to be a character themselves and be part of the story,” the brothers added.

The interactive microsite, which the brothers built outside of production and financed out of their own pockets, is a replica of the site that exists on the show, complete with being able to become the characters’ friends, leave them comments and more.

“We are under the firm belief that true success with narrative content on the web can only exist with interactivity and immersion, to give your viewers a world to fall into and to become involved in the series on all aspects,” the brothers said. “That is what makes the web so great, and why people watch content online. On TV it’s static, on the web it can be four dimensions.

“As you see with My Profile Story, a series about a web site, to us, the show couldn’t exist without a physical site to connect with,” they added. “We are very proud of the microsite, and have big hopes to incorporate viewers in even more unique ways if we get more episodes.”

If the series does well online, the brothers said “it may play on AtomTV on Comedy Central at some point.”

The brothers wrote, directed, produced and appear in MPS and penned all the content on the microsite as well. The cast of MPS also includes faces familiar to fans of the Fine brothers: Lisa Schwartz and Kristin Findley.

MPS was produced by Streamy Award nominees Leah Mann (The Guild) and Sevan Najarian (The Legend of Neil, The Pop) did the editing and visual effects.