Blade Runner. AI. I, Robot. Robot Stories. Nothing makes us feel more human than watching robots pretend to be like us – and blur the lines in the process.

That emotional reaction is the basis for condition:human, an upcoming science fiction web series written and directed by Vancouver-based filmmaker Trenton Lepp and starring Kristian Bakstad and Arnica Skulstad Brown that explores themes of humanity and artificial intelligence in the near future. Official synopsis:

In the near future, man has begun to address the economic and environmental issues plaguing the early 21st century. Rapid technological advancements have changed life dramatically, especially the creation of advanced humanoid robots who have begun to play an integral part in everyday life. Takumi Kenji, the reclusive CEO of Kenji electronics, and father of all things A.I. has announced the first ever ‘companion’ bots, a model of humanoid who’s interactive capabilities are remarkably natural. As robots continue to evolve their place amongst us must evolve as well, and as it does society carries the responsibility of answering the moral questions that come. 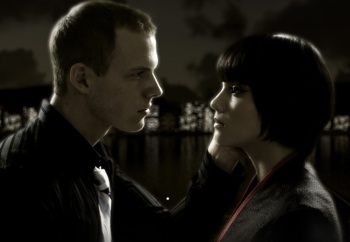 condition:human is currently in production, so there’s not much at the website besides a teaser trailer, a little clip about the production methods (the show is also being used as a tutorial project of sorts for Binary Crumbs), a brief synopsis and a wallpaper. What we do know about the show is that it is a) executed on a shoestring budget, b) makes heavy use of green-screen techniques, and c) will finish its run at six episodes, each about 15 minutes long. Rather than torment you with those tantalizing tidbits, we’ve opted instead to extract a little bit of information from writer/director/co-creator Trenton Lepp himself.

Tubefilter: Tell us a little bit about the concept and creative inspiration behind the series.

Trenton Lepp: Interestingly, the concept for the series was born from another short film myself and Kristian Bakstad were working on.  At the time we were exploring the relationship between a character’s real life and his life within a persistent online world.  As avid fans of a certain MMO we were interested in showing the reasons behind the vast popularity of such games and why many people feel more comfortable in the social environment of an online world then the world around them. 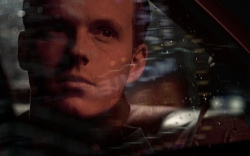 For myself, writing this type of story presented several problems, most prominently trying to display the character interacting with this technology in an interesting way. At this point we began to wonder if it would be technically possible to do a science fiction short film set in the future with no budget, so we started to do several green screen tests. By setting the story in a time when humanoids exist it allowed us to explore the same themes we were previously excited about but made for a much more interesting interaction with technology. It also opened up a world of humanoid related themes such as those explored in Blade runner, AI, I Robot, 2001: A Space Odyssey, all of which are a creative inspiration for condition:human.

Tubefilter: Why choose to work in the web series format?

TL: Weeks into the process of outlining the story I realized it had progressed beyond what we could feasibly display in the short film format. However, the idea of attempting a feature seemed incredibly daunting. This was coupled with the fact that we have no funding at all and so the web was a natural immediate means of distribution. Personally, I believe that the web, and especially the genre of web series, is beginning to emerge as one of the prominent places for studios to find new, dedicated film-making talent and I’m hoping we can show our passion for this art through condition:human.

TL: The production process is going well as we are roughly 30% through the principal photography stage.  Our aim is to release episode 1 on April 1st and follow it up with an episode every 2 weeks until the series is complete (6 episodes).  As far as budget is concerned it wasn’t a conscious choice, we’d love to have financing that would allow us to explore parts of the universe we are presently unable to show on screen but at the same time we want to release a very strong, character driven science fiction series and shooting as we are (with no money) gives us full control of what we are able to show.

Tubefilter: Tell us about your casting choices..

Casting for a no-budget web series is extremely difficult, however we’ve assembled a very talented and dedicated cast. The feedback we’ve had from the original trailer has been very positive however it was a visually driven piece that told very little about the characters and story.  I’m really looking forward to releasing the series and presenting the performances we are getting from these passionate actors who, since we have no money, are certainly doing it for the love of their craft.