'My Roommate the Cylon' Plays Battlestar Galactica the Home Game

Dwight Schrute, along with thousands of followers worldwide, will be a very sad individual when March 20, 2009 breaks the crack of dawn. That day would mark the end of a television phenomenon, which gave beloved nerds like Dwight something to look forward to in their Friday nights. After five years of intergalactic struggle and engaging space opera, Sci-Fi Channel’s long-running hit Battlestar Galactica will air its final episode in three weeks.

However, as you bid your farewells to Commander Adama, Number Six and Dr. Baltar, there would be no need to shed those tears of sorrow and longing. Why? Because just like any fanboy/girl would do, two devoted followers of the series have decided to take up the BSG flag and wave it on the air—yes, like they just don’t care. SpaceShank Media’s Alec McNayr and Bob Gustafson (who also created acclaimed Flipper Nation) recently launched their hilarious new web series, My Roommate the Cylon. 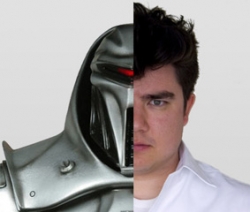 Giving much respect and salute to the sci-fi series, this comedy spin-off revolves around the story of three roommates Bennett Jacobs (played by Alex Enriquez), Pjeter Odama (Tyson Turrou) and Dale McKinney (Kenny Stevenson). The catch? Well, after receiving a letter from a mysterious sender, one of these guys apparently had a skinjob—nothing gross or raunchy, it just means that one of them could potentially be a Cylon who wants to eradicate the human civilization.

For those who are unfamiliar with the series and still question the power of Edward James Olmos, here’s a quick premise of the series: Battlestar Galactica is the only surviving military capital ship (or is it…) when the Cylons ambushed the Twelve Colonies, which was a series of planets inhabited by humans. Commander Adama must lead the surviving fleet to an ancient refuge, known as Earth. The series also launched an early web series called The Resistance, in 2006.

While the inside jokes and silly references to BSG in My Roommate the Cylon may tickle fans of the series, it may not even put a grin on others. The classic slacker humor adds another comedic perspective to the new web series, thanks to the stars of the show. So don’t worry about brushing up on some BSG knowledge to enjoy it—it is indeed pretty frakkin’ funny.

So who is the unknown alien culprit? Make sure you point your browsers at MyRoommateTheCylon.com every Friday. Oh and make sure don’t forget grab the mail from the mailbox—it’s only .4 clicks away, C’MON!