Recently street food has become the talk of the culinary world. Some chefs have gassed up fancy new trailers to offer everything from Twitter-loving LA-based Kogi BBQ to gourmet hot dogs. Last week Daniel Delaney launched VendrTV to document the street food scene. He starts with Kim Ima’s Treats Truck full of fresh bakery sweets in New York City. Watch for new episodes in Philadelphia and cities near you soon.

Tubefilter caught up with Delaney to ask him about his delicious new show, his all time favorite meal, and what the crew of VendrTV will be eating next. 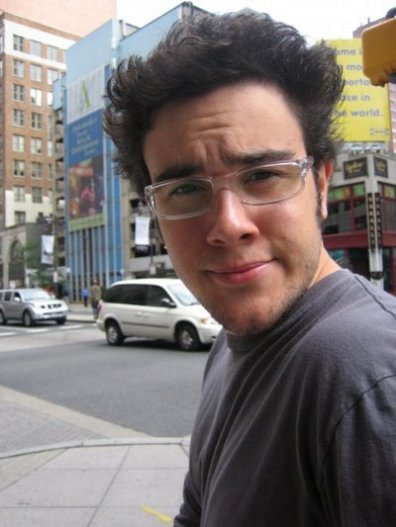 Tubefilter: How did you become such a big fan of street food that you wanted to make a show about it?

Daniel Delaney: really stumbled into street food. Having always been a foodie, I decided to focus the thesis of my BFA in Multimedia in the food industry. Being an entrepreneur who lives for design and food, I was interested in learning how brand development helps or hurts local restaurants. One thing leads to another, and I started exploring segmentation, and what small businesses can do to differentiate. To best explore this I decided I needed the most visually homogenous test subject. Well as it turns out, nearly all the street vendors in Center City Philadelphia work from nearly identical stainless steel street carts. Bingo.

After completing the thesis, and finishing up school I had learned two major facts about the street food scene. First is that it’s extremely unexplored and really deserves more attention than it gets. And secondly, to me, a street vendor is the epitome of effort. They’re hard working individuals who wake at the crack of dawn, often in the freezing cold, and stand in a small box until the sun sets. That’s hustle. And it deserves to be supported.

Tubefilter: Your described your show as  “best curbside cuisine the the world has to offer.”  What do you have against restaurants?

DD: Well I most certainly love restaurants! I haven’t bought a new piece of clothing in over a year, but when a new joint opens up, I’m there! I’ve been known to drive hours between states when I get a hankering for a specific meal. So saying I dislike restaurants is far from the truth. But for the sake offocus, I let my love of street food prevail.

Tubefilter: Your first episode features Kim Ima and her Treats Truck. Her mobile bakery seems like it is a truck full of happiness and sugar shock.  How did she become the subject of your first episode? How many sugar cookies did your take home?

DD: Starting any show most certainly comes with a lot of growing pains. But we were determined that we wanted to open with a bang! Something sinful, delicious, and most certainly unhealthy! The treats truck seemed the perfect fit. Plus, the launch was right around Valentines Day. We would have been foolish to not take advantage of all those scrumptious heart shaped cookies!

Sadly, I didn’t take any home. I had a great crew that came and worked with me on the shoot for nothing more than the love of the game. It was only fair that they got the bag of sweets Kim so graciously gave us. 🙂 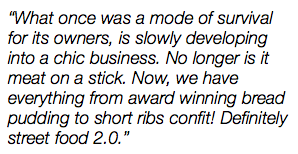 Tubefilter: Tell us about the process of shooting and editing an episode?

DD: We begin with the research phase of each episode. Each city is filled with a myriad of vendors. And since we have no interest in being a forum for critique, we have a lot of scouting (eating) to do. When we find the vendors we would most like to work with we coordinate the shoot, prepare a script, and get to set. Generally there are 5 people on set, two camera operators, a sound guy, a producer and myself. We shoot an interview, testimonials, intros, outtros, and heaps of b-roll. Then it goes off to the cutting room. Finally after voice-overs, color correcting, and music added, we render… all in time for Tuesday, our weekly release date.

Tubefilter: What camera are you shooting with?

DD:We shoot the show with two Panasonic HVX cameras shooting at 720p, 24fps. We also use a wide-angle lens for most of the shots. Editing is done in Final Cut Pro. Our team is made up of around seven people.

Tubefilter: The first episode looks pretty polished. How did you develop the tone and style of VendrTV?

DD: While we’re pleased with the first episode, we learned a lot and received tons of feedback. All of this will be filtered into future shoots, and could possibly affect the tonality of the show. That being said, my onscreen and off-screen personalities are nearly indistinguishable, and I think the pace of the show developed as a support agent for it.

Tubefilter: You have filmed episodes in NY and Philadelphia. What other cities are on your street food map?

DD: We’d like to travel all over the world producing this show, but we’re not quite there yet. Soon, however, we’re planning a west coast tour starting in Seattle, heading south through Portland, San Francisco, Los Angeles, and San Diego. As the show’s community develops we hope to talking to them about their favorite locations. Hopefully this will one day drive our itinerary.

Tubefilter: What was you most memorable street food meal in your life so far?

DD: This is an easy question. For me, the Döner Kebab sandwiches from the streets of Berlin are by far my favorite. While I was residing there, I would venture out every evening to fetch one. And unlike being in the states, the street vendors sell cold beers right from the carts. Döner + Beer + Berlin = Bliss. Mmmm!

Tubefilter: What are the biggest trends in street food that you have discovered?

DD: Street food is really divided. What once was a mode of survival for its owners, is slowly developing into a chic business. More and more heavily branded carts, trucks, and even airstream trailers and popping up all over. And the cuisine is really undergoing renovations. No longer is it meat on a stick. Now, we have everything from award winning bread pudding to short ribs confit! Definitely street food 2.0.

Tubefilter: Does anyone have a mobile bar, microbrewery, wine tasting truck?

DD: Certainly, but not in the USA. Vending is controlled at the city level. Some cities (like NYC and Portland) are extremely liberal with their licensing. As a result the community flourishes. However, most cities don’t zone street food as restaurants, and as such you rarely see liquor sales. Additionally, the cost of liquor licenses alone can be very preventative. Travel abroad, and you can go on a cart crawl, slugging and chugging along.

Tubefilter: What is your goal with VendrTV?  Would you like to be a star on the Food Network?

DD: My goal or VendrTV is simply to help raise awareness for the street food industry. These vendors are the salt of the earth, and really deserve more support than they get. As for the show, who knows where tomorrow will bring us. As long as we can break even financially, we’re happy to create it!

The Food Network is a great channel. But to be quite honest, I’m more interested in the internet. I don’t think there’s any doubt that it is the platform we’ll soon all turn to for content. And as technologies evolve to make the computer to TV gap move ubiquitous, those currently making content for the web are going to have a great advantage! I’m looking forward to that.

Tubefilter: Where should we eat next?

DD: Eat anywhere, but eat local! I implore everyone to skip Panera or Qdoeba next lunch, and find a local guy to buy your food from. If it’s a street cart, great! But if not, that works for me too. You’ll be doing a good thing for your local economy (which most no doubt neat right now), creating a relationship, and probably eating much fresher food. And if street food is your thing, take a few steps away from the highly publicized carts! Hop on a subway to an obscure neighborhood, you’ve never visited, and try something that scares you! Who knows, you might find your next favorite meal.