Travel Channel Follows 'The Adventures of Mark and his Monkey' 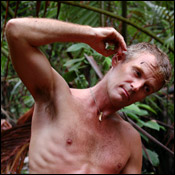 In the years of experience in his life and career, Travel Channel’s Mark Anstice is one of the last men on Earth you’d expect to be bothered by a challenge. Anstice is a survival expert who has trekked miles and miles of nature’s wild terrain. He’s also a war veteran, where he rose up the ranks in the British Army as a captain. But during his latest Travel Channel adventure series, Mark and Olly: Living with the Tribes, where he co-hosts with acclaimed international reporter Oliver Steeds, Anstice encountered something he truly wasn’t ready for—to become a father.

Oh, and it’s a girl—a tiny, cute and hairy primate. Even Anstice was forced to ask himself, “How the hell did that happen?”

The Adventures of Mark and his Monkey is a new web reality series from the Travel Channel, spinning off Mark & Olly: Living with the Machigenga which is the third season of Living with the Tribes. In the series, Anstice encounters a baby monkey, which he named Gianna, whose mother was killed by the tribe he was staying with. Reluctant with giving care to the infant primate at first, Anstice decides to adopt the furry tot and cradle her as his own.

And just like how a great and prideful father (monkey or not) would take care of his young, Anstice becomes a watchful parent. He stays up all night just to make sure the tiny creature sleeps well. He tends her wounds with so much care like a lion licking his cub’s scratches. Anstice would even go as far as stealing milk from his own film crew just to make sure Gianna’s well fed. It’s too bad he can’t see her walk away during Gianna’s first day of school.

From its locale and direction, the series does its job as a documentary fairly. However, looking at it at a different light and perspective, The Adventures of Mark and his Monkey exceeds in giving that sort-of “tender” feeling through Anstice’s nurture and care to Gianna. And who could’ve been a better man to develop a “tender” side of things than Anstice—a rugged man with a soft side for the kiddies. This series could be nature’s The Pacifier—except that it would be infinitely more pleasant to watch.